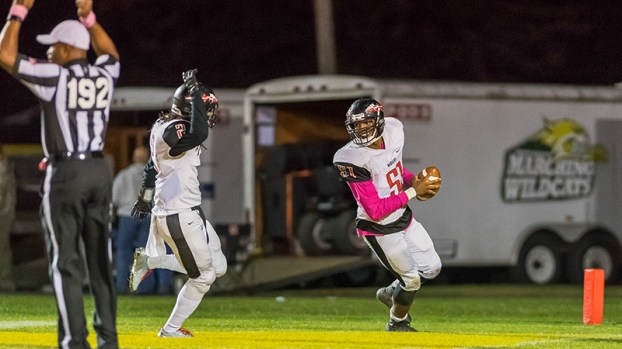 Datron Branch and Quincy Gregg celebrate in the end zone after Branch scooped up a fumble and returned it for a touchdown during the Warriors’ dominating performance against Great Bridge. Sarah Murphy Photo

The Warriors got back in the win column Friday night with a dominating 63-0 win on the road against Great Bridge High School.

Nansemond River High School improved to 5-4 with the win. They logged their highest point total of the season and got the win in all three phases.

It all started in the first quarter, when the Warriors scored 42 points. On offense, the Warriors got three touchdowns out of Kevin Johnson. He had two rushing touchdowns, while he and Kori Riddick also connected on an 89-yard touchdown reception.

The Warriors achieved their third shutout of the season. They shut out both Hickory High School and Western Branch High School earlier this year.

NRHS will return home for homecoming next week against Grassfield High School which will also be their regular season finale. As the playoffs approach, Nansemond River is not only trying to secure a spot but a higher seed as well. With a win over Grassfield, Nansemond River can secure their third straight winning season.