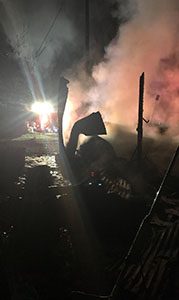 The first fire happened in the 5600 block of Frank St. It was reported at 11:46 p.m., according to a city press release The first unit arrived on the scene six minutes later and found smoke showing from the eaves of the home. The stove fire was contained to a small area of the kitchen and marked under control at 12:08 a.m., according to the release.

Two occupants were displaced and are receiving assistance from the American Red Cross, the release stated. The fire was determined to be a cooking fire and ruled accidental. The Chuckatuck Fire Department responded along with Suffolk Fire & Rescue crews.

The second fire was a barn fire at a residence in the 4600 block of Shoulders Hill Road. It was reported at 2:57 a.m., according to the press release.

The first unit arrived on scene at 3:06 a.m. and found a large barn fully engulfed in flames. A horse had been rescued from the barn prior to firefighters’ arrival.

The fire was marked under control at 3:35 a.m. The fire marshal’s office is investigating the cause of the fire, which remains undetermined.

Touch a Truck, Train and Trick or Treat

Hundreds of children and parents visited the Suffolk-Nansemond Historical Society’s Touch a Truck, Train and More fundraiser on Saturday at... read more