Margaret Boone’s residence in Gates County, N.C., is filled with pictures of her grandchildren and great-grandchildren. There’s also a signed letter from President Barack Obama that congratulated her for reaching 100 years of age in 2015.

She beat her personal best once again on Monday when she turned 102 years old.

“I’m doing pretty good,” Boone said while sitting in her favorite chair. “It’s good that God has kept me here this long.”

Known for her strong faith and generosity, Boone was born and raised in Aiken Hill, N.C., a community found between Elizabeth City and Sunbury, her daughter Daisy Baker said. 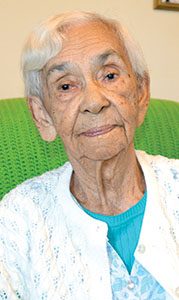 Boone fondly recalled plowing in the fields, chopping wood and keeping up with housework as a child at her family’s farm with her parents, Willis Jones and Florence Smith-Jones, plus her eight siblings.

Many of her brothers and sisters moved to Suffolk as they got older, but Boone moved to Gates County with her late husband, George Boone, Baker said. There, the couple raised Baker and her siblings, Carolyn Knight, Sadie Riddick, Tyrone Boone, Curtis Boone and George Boone Jr.

“Most of momma’s family was in Suffolk, but I can remember that she was the only one in North Carolina,” Baker said.

Boone said her husband was a “hard worker” that took care of the farm while she kept their house in order.

Boone spent 40 years as a secretary at First Baptist Church in Gates, Baker said.  She was dedicated to helping her church and keeping her family and neighbors happy with fried chicken, hot biscuits, sweet potato pudding and more splendid cooking, according to her caregiver, Clementine Rountree.

“She used to feed her friends and neighbors,” Rountree said. “She always loved to help.”

Boone remembered the garden she kept next to her house. She would grow corn, collard greens and more, and whatever she didn’t cook would go straight to her friends and neighbors, she said.

“I was glad to give them some,” Margaret Boone said. “I couldn’t use it all.”

She spends her time these days enjoying spirituals on her radio, along with broadcasted sermons from the Rev. Charles Collins, a personal friend of hers.

The 81-year-old preacher said Boone must have been blessed for obeying her parents, because she’s still active in her old age.

“She gets around just as good as I can,” Collins joked.

Baker and her siblings look after their mother daily with help from Rountree. They were joined by Boone’s grandchildren and great-grandchildren at the Gates County residence on Monday to celebrate her birthday.

“My family is so good to me in my old age,” Boone said. “I don’t want for nothing. They take care of me at every beck and call.”

A Suffolk church will host a community event to honor and support its military community and provide fun and games... read more