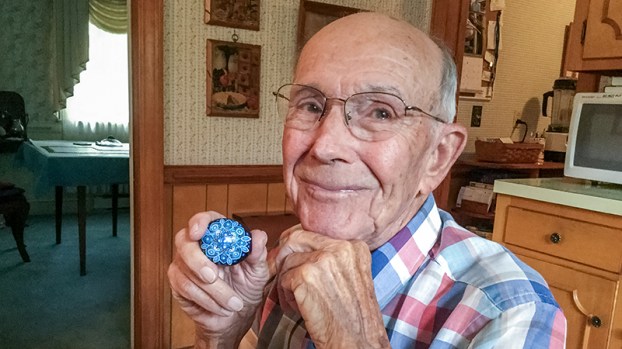 Ellnor Horton shows off one of the rocks he found as a member of the Suffolk Rocks group. He celebrates his 100th birthday on Wednesday. Submitted Photo

Ellnor Horton is quite possibly the most active 100-year-old in Suffolk.

The Riverview resident celebrates his 100th birthday on Wednesday, but he’s not showing any signs of slowing down. He once told a younger person that sitting in a rocking chair would kill him.

“I don’t see a difference,” Horton said Tuesday of being almost 100. “Right now. I might a little later on.”

Horton still does things some folks 20 years his junior couldn’t think of accomplishing. He volunteers for Meals on Wheels, works out at the YMCA and visits the golf course, where he gets in some strokes on the driving and putting ranges.

“I make out pretty good,” Horton said of the putting range. “I hit them and knock them in the hole.”

With his Home Instead Senior Care caregiver, Cheryl Pisani, Horton hunts for painted rocks as a member of the Suffolk Rocks group, where he is believed to be the oldest member. He also enjoys painting and hiding rocks himself, but his favorite hiding places are his secret. He likes visiting Chick-fil-A and eating butter beans at Derl’z on East Pinner Street.

Horton was born on a farm in Whaleyville to Walter Henry Horton and Hattie Louise Gomer. His father was a Civil War veteran and the youngest of six boys in a family of 12 children.

Horton grew up as one of seven children on the farm. “They were all hard workers and very industrious,” his daughter, Trudy Cuthrell, said.

His mother died when he was 12, and four years later, his father remarried Pattie Parker Savage.

Horton worked on the farm doing whatever needed to be done. At age 9, he was already driving the farm machinery and the family car, Cuthrell said.

In high school, Horton and his brothers designed and built their own chicken coops and started their own business. They made the 12-mile trip with a horse and carriage to the Suffolk city market on Saturdays to sell eggs and fryer chickens.

That’s where he met Catherine Virginia Jones, who became his wife on June 21, 1945. They were married at First Baptist Church Suffolk by the Rev. J. Lester Laine and enjoyed 54 years of marriage.

The couple had three children, Trudy Cuthrell, Eleanor Jean Willits and Jimmy Horton, all of whom are still living. They also have five grandchildren and one great-grandson. One of Horton’s brothers, 93-year-old Elliott, is still living, along with Elliott’s wife, Dorothy.

The Hortons made faith a priority and passed it on to each of their children, Cuthrell said.

“That was a huge part of our lives growing up,” she said.

Horton is still a member of First Baptist and is a life deacon at the church.

Horton enjoys vegetables but also gets his sweets in, Cuthrell said. His dessert every night is a bowl of ice cream with Oreos.

The family will celebrate Horton’s birthday Wednesday with breakfast and dinner out, and Horton will go on his regular route with Meals on Wheels. On Saturday, a party is planned at First Baptist from 2 to 4 p.m.

Horton’s advice to others is “Always get up with the chickens, and go to bed at the same time every night,” Cuthrell said.

He also tells folks to drink lots of water rather than soda or coffee.

“Water is good for your health, and it’s free,” he says.

Suffolk native gets a shot in movie

A Suffolk rapper who has been honing his craft for 20 years landed one of his songs in a critically... read more