Cydney Nichols has made her mark for the North Carolina Wesleyan College women’s soccer team in her first year.

The former King’s Fork High School standout didn’t seem to have too much difficulty transferring her game to the college level. As a freshman, Nichols led the team in scoring with 10 goals and also had one assist.

Her impressive freshman season earned her second team all-conference in the USA-South Conference in the East Division. She called the honor a blessing, especially considering this is her first year of college soccer.

“I’m proud of my freshman season,” Nichols said. “I’m proud of the things I was able to accomplish here. At first, it started off a little shaky, but I started to get into the swing of things.” 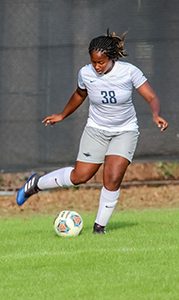 She scored a season-high two goals against William Peace University on Oct. 18. Her biggest highlight came against Greensboro College in the first round of the USA South Tournament. Nichols scored the game-winning goal to give her team a 2-1 victory and advance it to the USA South quarterfinals.

NC Wesleyan finished the season 6-11-1, and Nichols is nonetheless satisfied with her individual performance for the season.

“I wanted to start my college career off with a bang, so I did what I needed to do for my team,” she said.

Nichols wants to continue to raise her level of play. She doesn’t want to be just satisfied with what she did her first year, because she knows there is always room for improvement.

At King’s Fork, she became the school’s all-time leader in goals. She was also the Conference Player of the Year. Nichols play also helped King’s Fork to its first state tournament berth. She was also a first team all-region and all-conference selection.