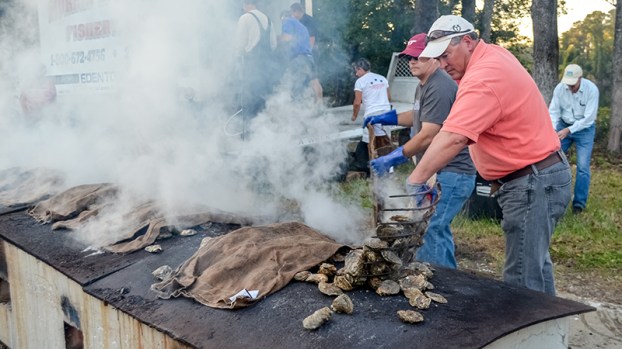 Temperatures settled above 70 degrees on Wednesday, setting the scene for an outstanding turnout of friends, family and seafood at Everets Farm.

The North Suffolk Rotary Club’s annual oyster roast sold out at 350 tickets leading up to the event, according to Al Roosendaal, the club’s president. Rotarians were joined by family and friends that gathered around the five rows of makeshift tables.

“We couldn’t have asked for better weather,” Roosendaal said. “This is absolutely perfect.”

Banjo, guitar and drums were played from the stage, as smoke rose from the concrete grill and people enjoyed water, wine and cold beer with old friends.

“It’s just a gathering of family and friends to have a good time,” said Franklin resident Debbie Jackson.

Roosendaal said most of the 65 registered club members worked since 7 a.m. Wednesday morning to prepare for the roast. They also got help from about eight Nansemond River High School students in the school’s Future Business Leaders of America club, which has built a relationship with the North Suffolk Rotary Club in the last few years.

Proceeds from the oyster roast support the FBLA, along with other charities and organizations such as the Roc Solid Foundation of Chesapeake and the Western Tidewater Free Clinic.

Student Shelby Cotton said she appreciates the networking opportunities at the event, and how it’s inspired more students to join over the years.

“It’s a very good experience for all of us, and it encourages people to join FBLA to get their hours of community service,” Cotton said.

The only inconvenience was a delay on the oysters themselves.

North Carolina-based supplier Murray L. Nixon Fishery’s truck did not arrive until about two hours after the start of the event. Some were frustrated by the delay, but many simply passed the time with more friendly conversation.

As soon as the truck arrived, volunteers started cleaning the 60 bushels of oysters beside the custom-made grill.

The grill was donated years ago by Doug McConnell, president of local concrete manufacturer Nansemond Pre-Cast Concrete Company and one of the property residents. The base is made of concrete blocks, and half-inch-thick, convex steel plates were placed on top.

The oysters were poured on those plates as the fires blazed at more than 1,200 degrees, according to Rotarian Josh Pretlow. Wet burlap bags were laid on top of the oysters to preserve their moisture and prevent them from burning.

“It is slam-hot,” Pretlow said.

The oysters were steamed and ready within minutes. FBLA students filled wheelbarrows full of them, and they followed as Rotarians pushed the first batches to tables.

Woody and Cindy Sweet were ready with their oyster knives. The couple popped them open in quick succession and enjoyed the slightly slimy and very succulent meat with a hint of salt flavor.

Were they worth the wait?

Her husband added that they would be there until all the oysters were gone.

“Me and her together can’t eat a bushel, but we can put a good dent in one,” he said.

More than 100 Suffolk Public Schools parents have registered for a new tool that allows them to track the location... read more