The Radford University senior libero hit the milestone against Gardner-Webb University last weekend. Nash called the achievement amazing as she is in the midst of her best season yet.

Her coach, Marci Jenkins, was also impressed with what Nash was able to do.

“Nash has done a really nice job for us lately,” Jenkins said. “She broke through with 1,000 digs, which is a really nice accomplishment considering she hasn’t worn the libero jersey her entire career.” 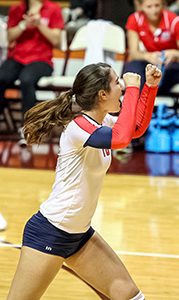 “I never expected to reach 1,000 digs just because I haven’t been the libero much since this past year,” Nash said. “So finally reaching 1,000 was surprising but exciting.”

Nash has also been getting recognized for her defensive efforts throughout the conference. She has earned Defensive Player of the Week twice this season, with her most recent coming on Oct. 30 after she led the league in digs per set with 47 digs over seven sets. Her goal coming into her senior season was to get that award at least once this season. As for her team, they are currently 21-3 and doing better than what most projected them to do.

“It has been a great season,” she said. “I have been playing libero this season, and I have gotten Defensive Player of the Week twice. As a team, we have gotten some good wins against some good Power 5 schools. I think this team is the best I have been on in my four years.”

Nash also believes her team has a good chance to make the NCAA tournament this season. At NSA, Nash was the Virginia Independent Schools Athletic Association State Player of the Year as well as a two-time Conference Player of the Year. She was also the school’s leader in digs before Logan Harrell surpassed her record last season.

Greene named Player of the Year