Just two weeks after setting a personal-best pace at the High Point VertCross Invitational, Williams broke that mark on the Big South’s biggest stage, posting a 6:54.0 on the 5K course. That was the best performance by a Longwood women’s runner this season.

She became Longwood’s first women’s runner to break the seven-minute-per-mile pace mark in 2017 and set her team’s season-best 5K time in the process. 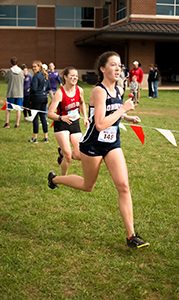 A product of Nansemond River High School, Williams is now on a streak of four consecutive personal-bests in her inaugural season.

Her 51st-place finish Saturday was Longwood’s highest by a freshman at the Big South Championship since joining he conference six years ago, while her time was the second fastest by a Longwood newcomer at the event and trailed only Gracie Piekarski’s 20:39.0 at the 2013 conference championship.

Since Williams’ debut as a Lancer at the JMU Invitational on Sept. 9, the freshman has shaved 1:43 off her initial 5K time, culminating with Saturday’s PR at the Big South Championship.

While the 2017 Big South Championship marks the end of Longwood’s conference season, the Lancers have two more meets ahead of them this fall. The first of those was on Friday at the Hokie Open in Blacksburg, while the second is the NCAA Regional Meet, set for Nov. 10, in Charlottesville.