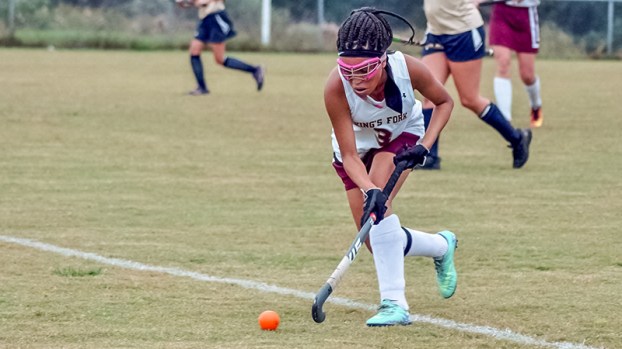 Anaya Godfrey was voted Suffolk News-Herald Player of the Week after scoring a goal and making many other plays for her team in a win over Deep Creek High School. Carolina LaMagna photo

Anaya Godfrey was voted Suffolk News-Herald Player of the Week after scoring a goal and making many other plays for her team in a win over Deep Creek High School.

Godfrey is a junior for King’s Fork High School who recently enjoyed what she calls her best season yet. Before the season started, she did not know what to expect, as the Lady Bulldogs did not have a coach, but then coach Ashley Skinner was hired.

The Lady Bulldogs finished the season with a semifinal regional tournament loss, but Godfrey could not have been happier playing with this team.

“I think we showed everyone who we are and not to underestimate us,” she said. “It has been such a great season working with such an amazing group of athletes.”

Against Deep Creek last week, Godfrey scored one of the team’s two goals. However, it was not the goal that made her play impressive in that game or the game before that against Granby High School. Coach Skinner raved about her elimination skills and passing progressions in those games. The junior followed those performances up with a four-goal explosion against Churchland High School in a 9-0 win in the regional quarterfinals. Those four goals were a career high for Godfrey, surpassing her previous high of three.

“I did everything I could to help our team to perform to the best of our abilities,” she said. “Keeping my composure on the field was one of the biggest things that went through my head during the intense situations. I found that it brought me extra confidence in doing what I needed to do for the team.”

Her team is what motivates her. King’s Fork has a lot of faith in Godfrey, and she feels it is up to her not to let the team down. She was chosen as captain this season, and she saw it as an opportunity to hold the standard for the team.

“I believe every single one of them thinks so highly of me,” she said. “I know that being a team leader if I show one sign of disappearing, that it would rub off on my team and that vibe I refused to have for us. Every game I took as a learning experience.”

Skinner thinks highly of Godfrey as well, which inspires her even more. She believes in the junior not only as a player but as a person. The Lady Bulldog’s mother inspires her as well. Not only is her mother her best friend, but she also does a lot for her to participate in offseason activities, helping her become the player she could be.

“She is always at my games cheering me on with my dad, and I want to be as awesome as her one day.”

In her spare time, she loves spending time with her grandparents and volunteering and working. Godfrey’s play this season earned her an honorable mention in the Southeastern District, and she is looking forward to her senior season.

Lakeland closes with shut out

Lakeland High School ended the regular season with a 45-0 shut out of Great Bridge High School on Friday. The... read more