Hobbyists fly for a good cause 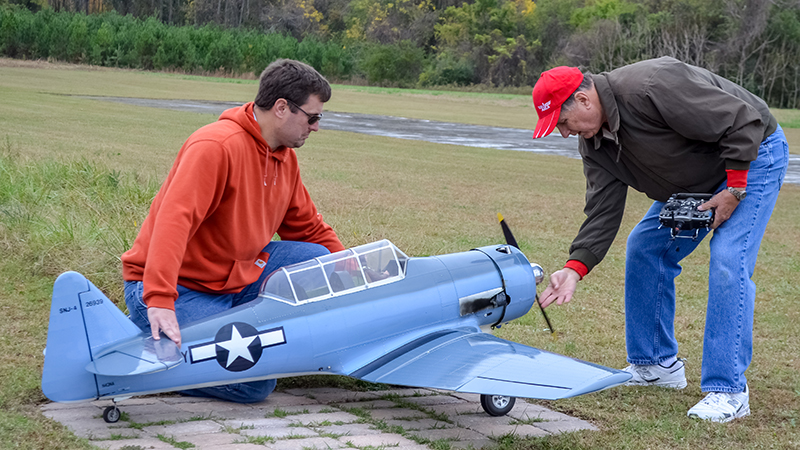 Jeff Haywood and his father David Haywood, both with the Hampton Roads Radio Control Club, make adjustments to a model Navy warbird during the 11th annual Toys for Tots Fly In held at Lone Star Lakes Park airfield on Saturday.

Andreas Mueller, 44, gave a crowd the sight of an airborne Christmas tree on Saturday.

The Hamburg, Germany, native’s radio-controlled aircraft was cut and painted to also include the likeness of his pet cat perched on top of it.

He made the odd-looking contraption spin, hover, and soar through the air at the Lone Star Lakes Park airfield for an amused crowd.

“It was pretty cool,’ said 6-year-old Natalie Smith, who enjoyed the sight with her family.

Mueller was one of more than 30 registered pilots at the 11th annual Toys for Tots Fly In held by the Hampton Roads Radio Control Club, according to event chairman Mills Staylor. Pilots came to fly all kinds of remote-controlled aircraft and were asked to donate $10 or a new, packaged toy.

Proceeds from the event go to support Suffolk’s Toys for Tots program through the Suffolk Cheer Fund, which raises money to purchase and distribute thousands of toys each year. The event on Saturday raised three boxes of toys, along with $3,462 worth of cash donations, raffle tickets and food sales, Staylor said

He said that the dreary, overcast sky and cool temperature had dampened the turnout. A planned drop-in by skydivers was canceled because of weather conditions, he said.

Smith, an HRRCC member, said both the club and the event were a family affair, with his parents, brother and sister-in-law participating, as well.

“It’s just a great way to raise awareness for the club and raise money and toys for a good cause,” he said.

He said it’s fun putting the models through dives, barrel rolls, and passes inches above the ground.

“It’s just exciting to try new things, keep from crashing and practice the simple things to make it look professional,” he said.

“I’m partial to the warbirds,” Haywood said, explaining that he also had a P-51 Mustang model in his trailer in the parking lot.

Mueller’s creations are less expensive, ranging up to $400, depending on the electronics required, he said.

Mueller is a logistics specialist for the German military, stationed in the United States with NATO, and he has practiced his hobby since 1987, he said. He enjoys coming up with crazy designs, like several planes featuring the dog he shares with his girlfriend Michaela and another called “Mighty Wing.”

“My only idea was to put many wings on one plane,” Mueller said about Mighty Wing. “I ended up with 12.”

A member of the Newport News Park Radio Control Club, Mueller described how everyone you meet at these events is friendly and helpful. As pilots go through the trials and errors of the hobby, everyone seems to look out for each other, he said.

“You can come to a club, and everyone is friendly and willing to help you, like a big family,” he said. “It’s like coming home sometimes.”

Halloween spirit made from scratch