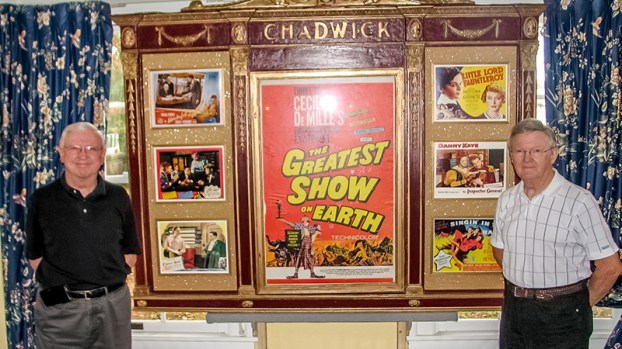 Lee King, left, and Kermit Hobbs show off the lobby card board that once hung in the lobby of the Chadwick Theatre. King purchased, and he and Hobbs restored, the board and donated it to the Suffolk-Nansemond Historical Society.

Piano returns to its old home

Historical items big and small are experiencing a homecoming of sorts at the Suffolk-Nansemond Historical Society.

The society recently acquired two large items of historical significance and has an exhibition running through December themed “The Art of the Table,” featuring china, silver and place settings.

The Phillips-Dawson House at 137 Bank St., where the society keeps its headquarters, was once the home of Dr. Challis and Mrs. Yvonne Dawson. Mrs. Dawson gave piano lessons to youngsters in the home with her concert grand piano.

The piano recently returned home, given by the estate of Jimmy Russell, according to society Executive Director Kim Blair.

Blair said the society hopes to have the piano tuned and be able to have it played during events at the Phillips-Dawson House.

The society’s former piano, loaned and then given by John Beneke, has been returned to the family, Blair said. The piano belonged to his late wife, Kassie, who took piano lessons from Yvonne Dawson in her youth.

“We will not forget the time we had her piano and appreciate the generosity of Mr. Beneke,” Blair said.

Another large item that recently was given to the society is one of two boards that once hung in the nearby Chadwick Theatre, advertising the current shows and upcoming attractions.

Lee King bought the board from a local man who had purchased it from an auction house.

“I just didn’t want anything to happen to it,” said King, who recalled seeing flicks including “King Kong” at the historic theater.

King donated the board to the historical society in memory of his late wife, Henrietta.

The Chadwick Theatre was built in 1924, King said, and formerly stood where 1 Foot 2 Foot Center for Foot and Ankle Care is today, just a block away from the Phillips-Dawson House. The building is on North Main Street in the historic downtown and faces toward Bank Street.

The theater, which showed both live acts and films, burned in 1982, and the board still bears the scars. The back of it is covered in soot, said Kermit Hobbs, who helped King restore it.

Hobbs found lobby cards for movies that could have been shown at the Chadwick and filled in the spots to show its beauty.

“It’s a piece of Suffolk lore,” said Hobbs, who also made a shelf for the board to sit on in the historical society’s sunroom.

In “The Art of the Table,” some of Yvonne Dawson’s dishes, which belong to the historical society as part of its permanent collection, are beautifully displayed in place settings. Replacements Ltd. donated items to fill out the display. Nine tables showcase various types of place settings and linens as well as unique pieces of crystal and china.

“It’s been fun to get them out and let people see what we have,” Blair said.

She said the exhibit, which was curated by Hazel White, will be on display through the end of December.

Schools to kick off rezoning

Suffolk Public Schools will soon kick off the rezoning process that will assign students to two new schools currently under... read more