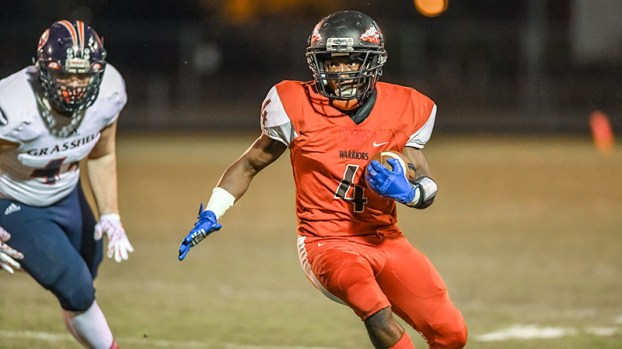 Rashaad Williams runs for one of many plays for the Warriors in their win over Grassfield High School for homecoming. Sarah Murphy Photo

The Warriors finished their regular season with a 6-4 record. It is the third consecutive winning season for the program. Nansemond River can now look to the region 5A playoffs, which features some quality teams.

“I was pleased with how the guys had played,” Warriors coach David Coccoli said. “They had played us tough in the past, so I was concerned, but we came out and played well and got ourselves another winning season. However, we get to host a playoff game, and that is important to us as well.”

Coccoli believes the third winning season the Warriors accomplished speaks to how they want to keep building the program. They have a young team with only eight seniors playing this year, which means they will have 16 starters returning for next year.

“You want to sustain the program,” Coccoli said. “I think we have done that here at Nansemond River. We are a really young football team.”

Coccoli and the Warriors do not want just to settle for a winning record.

“We are not done yet,” Coccoli said. “We believe we can make a little noise in the playoffs.”

Nansemond River will have the No. 4 seed in the 5A region playoffs and will likely host Princess Anne High School.