The senior Arizona State University guard shot 18-of-26 from the field, which included 11 threes, to give him 50 points in an exhibition against Arizona Christian. In his post-game comments, Evans said he knew he was having a hot night, but he didn’t want that to consume him. He wanted to get his teammates involved and not make the game about him. However, Evans’ teammates encouraged him to shoot more once they saw he was on his way to a career night. 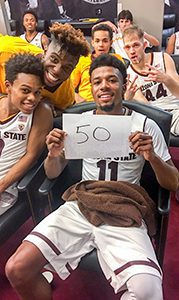 Shannon Evans II celebrates with his Arizona State University teammates after his 50-point effort against Arizona Christian University on Friday.

ACU is an NAIA school in the Golden State Athletic Conference. Evans is expected to be among the top scorers in the Pac-12 Conference this season. Last season for ASU, he averaged 15 points along with five assists. He is expected to play a significant role for the team in his senior season, as he did his junior season.

ASU is coached by Bob Hurley, whom Evans played for at his first college stop at University at Buffalo for two years. At Buffalo, he put up solid numbers, earning him all-conference honors. Once Hurley got the job at ASU, Evans felt it would be beneficial for his career to follow his coach. He wanted to showcase his talent on a bigger stage, and ASU and the Pac-12 Conference provided that.

“The first day of practice I realized that’s the last time that it will be the first practice of the season with Shannon. So, it’s going to be different,” Hurley said at 2017 Pac-12 Men’s Basketball Media Day. “He’s gotten better and better over the years. He looks terrific and ready to have a great season.”

Hurley also added that he has seen Evans become more of a student of the game while understanding and making good decisions. He feels Evans has refined his game to become a better leader.