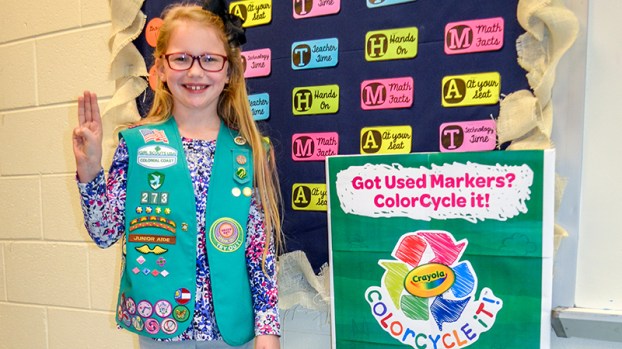 A Girl Scout is sending letters and decorating boxes for a recycling project that’s expanding throughout Suffolk schools.

Northern Shores Elementary School student Aliya Summers, 9, a member of Girl Scout Troop 273, has been decorating boxes since before the start of the school year. Some of these boxes are small enough to be placed on a table, while others are bigger than she is, according to Aliya’s mother and troop leader Ciara Summers.

The boxes are for collecting used Sharpies, highlighters, dry-erase markers and more from classrooms for Crayola’s ColorCycle program, a national initiative meant to keep hundreds of tons of markers from being sent to landfills by turning the used school supplies into a liquid fuel.

Aliya thought the collection boxes would be great for her Girl Scout Bronze Award, the highest honor a Girl Scout Junior can achieve.

“I want to do as much as I can to help the world be a better place,” Aliya said.

The young Scout is no stranger to taking charge of projects. When she was a Girl Scout Daisy in the first grade at Northern Shores Elementary School, Aliya collected more than 116 pounds of food for Helping Hands Food Drive.

For her ColorCycle effort, she first approached Tara Moore, Creekside Elementary School principal and her former principal at Northern Shores Elementary. Moore applauded Aliya’s energetic pitch for her boxes at a faculty meeting in August, which included boxes and information she prepared.

The teachers were impressed by her confidence and bubbly demeanor, Moore said.

Aliya sent letters about her project and ColorCycle to faculty at Suffolk elementary schools. At the same time, she collected boxes, cardboard, tape and wrapping paper from family. Her mother printed out all the information to be taped on them, Aliya said.

When Aliya wasn’t at school or karate, ballet and acting classes, she was in her living room making all the boxes herself, Ciara Summers said.

“My goal is to reach all the schools in Suffolk, so I’m very close,” Aliya said.

Moore said Creekside Elementary School has one box for each grade level. Teachers clamored for the boxes because dry-erase markers and highlighters have become more prevalent in the classroom, which helps save paper as well, she added,

“Expo markers have become more of a routine school supply, and dry erase boards have replaced chalk board in the classroom,” she said.

Aliya and her family will gather all of her collection boxes at the end of the school year and mail them to Crayola for processing. Boxes at Northern Shores are already filling up, and she expects to have several tightly packed boxes to ship at the end of the year.

Aliya seems excited about her project.

A special event at St. Andrew Preschool on Wednesday promoted ideas parents could put to use to instill good reading... read more