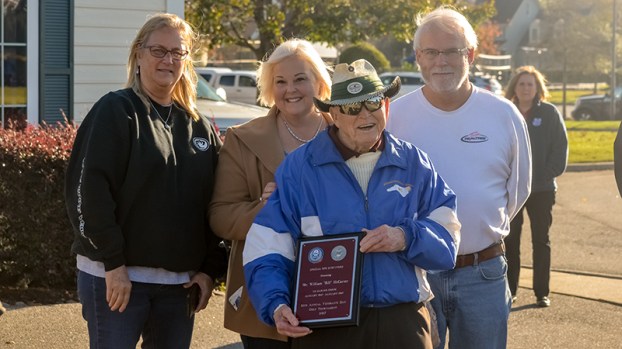 William “Bill” McCarter, 87, holds the plaque given to him on Friday at the 14th annual Veteran’s Day Golf Tournament at Riverfront Golf Club in Suffolk. The plaque honors his 20 years of service in the U.S. Marine Corps. Beside him, from left, are his daughter-in-law, Debbie McCarter, his daughter, Gwen McCarter-Carter, and his son, David McCarter.

William McCarter has been a regular at the Riverfront Golf Club in North Suffolk since it opened in 1999. The 87-year-old veteran of the U.S. Marine Corps spoke proudly about scoring an 87 in a round at the club recently, one of his best.

“He shot his age,” his daughter, Gwen McCarter-Carter, joked at the club on Friday.

McCarter was honored with a commemorative plaque during the 14th annual Veteran’s Day Golf Tournament held at the club on Friday. The plaque recognized his 20 years of service, and Gwen, his son, David, and daughter-in-law, Debbie, surprised him with a visit as well.

“I never expected anything,” McCarter said as he held his new award. “This is absolutely wonderful.”

The tournament drew about 68 golfers this year for a round of golf in the cold morning. Many of the golfers were veterans or active duty military themselves, and while the chill was bitter, they enjoyed another year of putting for a good cause.

“I’d love to see something like this go on for another 100 years,” said Navy veteran Mike Christoff, 62, who traveled from Florida for the tournament. “It’s well worth the trek from Florida.”

The proceeds from registration, raffle tickets and other fundraisers during the tournament support the Special Ops Survivors, a nonprofit organization dedicated to supporting surviving spouses of Army, Navy, Air Force and Marine Special Operations who have died in combat, training or otherwise in the line of service.

Since the organization recently updated their charter to include surviving spouses dating back to 1980, enrollment has grown from 235 survivors to more than 600, according to Special Ops Survivors board president and event organizer John Marshall.

Marshall said the tournament is the biggest fundraiser for the organization, with more than $10,000 raised through this year’s tournament. This will allow the organization to continue providing financial assistance, grief counseling and other services to enrolled survivors, including about 45 living in Hampton Roads, he said.

“It’s very special for my father,” she said.

She and her siblings, including Martin McCarter, who served in the Army, understood the difficulties facing military families. David McCarter described having to move between Georgia, New Jersey and Virginia, and even transferring between different schools in Northern Virginia while they were growing up.

“Wherever the military told you to go, that’s where you went,” he said.

Throughout their father’s service, from 1947 to 1967 and his time in Vietnam, their mother, Carolyn McCarter, was the backbone of the family, Gwen McCarter-Carter said. Her mother died in 2007 and had been married to their father for 57 years.

Special Ops Survivors supports those like Carolyn McCarter — spouses who are not serving overseas but still make sacrifices at home, Gwen McCarter-Carter said.

“One is serving actively, and the other is serving behind the scenes,” Gwen McCarter-Carter said.