Joan Turner recalls the exact time two years ago that she got word her son had been shot.

But no reports of shootings were made that night in Newport News, and no body has ever been found. Russell has not been heard from since that time.

Almost since the beginning, Turner has believed that her son is no longer alive. 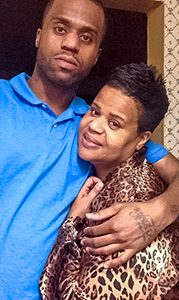 Joan Turner and her son, Quantez Russell, share an embrace in this photo from before he went missing two years ago.

“It’s hard for us,” she said. “I would like to have a memorial service. We just really need closure. Justice will take care of itself.”

It has been hard on everybody in the family, but perhaps especially Russell’s 10-year-old son, Turner said. She cried on Halloween night when the youngster, dressed as a Star Wars character, said he wished his father could see him in his costume.

Detective William Shockley, who is handling the case for Suffolk, said the investigation has been hampered by a lack of evidence and a lack of information.

“We’re getting a lot of people on the outside,” Shockley said. People have repeated second-hand information, but there has been a dearth of useful information coming from someone who actually knows.

“The biggest thing we need in this investigation is people that know what happened,” Shockley said. “At the end of the day, we need to find him. We just need to get to a point where we can close this chapter of it.”

Shockley said he keeps the case file on his desk, where he can see it every day.

“It’s not going away,” he said. “He’s not going to be forgotten about. This didn’t deserve to happen to anybody.”

Shockley made an appeal to the conscience of those who know what happened to Russell or know where he is.

“For any parent, the hardest thing is to not know where your child is,” he said. “If they had information about where your loved one was at, what would you want them to do?”

Turner said the family simply wants information on where he’s at.

“I just hope somebody speaks up,” she said. “We need to put his body at rest if he’s deceased, and the family needs some closure.”

Despite the hard situation they’ve been put in, the family is turning their pain into something positive.

The Quantez Russell Scholarship Fund has been established at SunTrust Bank. Anyone can go to a SunTrust branch and deposit donations, Turner said.

Russell attended Lakeland High School, but the family hopes to be able to award scholarships to one student from each Suffolk public high school each year. Applicants will write essays on how they would eradicate gang, drug and youth violence, Turner said.

Anyone who has information is asked to call Crime Line at 1-888-LOCK-U-UP or text the keyword SPDVATIP and the tip to 274637 (CRIMES). Tipsters never have to give their names or appear in court and may be eligible for a reward of up to $1,000.

Two local clergy groups are organizing a vigil this Sunday following last Sunday’s shooting at a church in Texas. At... read more