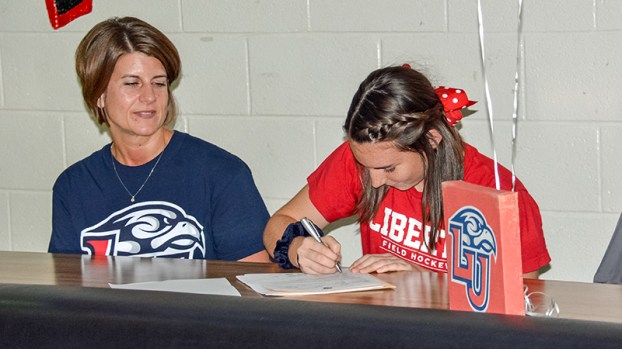 Rogers and Williams have put pen to paper on their National Letters of Intent to play at the college level. Williams has officially signed to play baseball for Longwood University, and Rogers has signed to play field hockey at Liberty University. Both athletes will be showcasing their talents on the NCAA Division-I level.

Rogers has been committed to Liberty since her sophomore year. At the time, she had gone on a lot of visits that allowed her to compare her options. She had come down to two schools, Wake Forest and Liberty, and decided that Liberty was the best fit for her. She went on a second visit to Liberty, which really sealed the deal for her.

“After the second visit, I realized that it was perfect and I made my decision right after that,” Rogers said. “I felt really welcomed there and most importantly to me the campus is a Christian environment, and I get the opportunity to grow in God and play field hockey. Everyone there has the drive to get better, and I just see myself fitting in perfectly.” 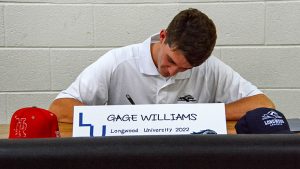 The Lady Warrior is looking to bring her intensity and work ethic to the Liberty field hockey program, which is currently ranked No. 23 in the National Field Hockey Poll. Rogers plans to major in sports management.

The four years she spent playing field hockey for Nansemond River she believes shaped her to be the player she has become today. Most of the work she put in on the field was on her own time before or after practice. Her teammates started staying with her to get extra work in as well, which led to her creating great friendships her four years playing and allowing all of them to learn from each other.

“I never wanted to settle for complacency and was always adamant about finding ways to get better,” she said. “It was a great four years, but I am definitely excited about going to play with a top 25 team.”

In her time at NRHS for field hockey, she was a first team all-conference performer and was Suffolk News-Herald Fall Female Athlete of the Year. She is also an all-state softball player.

Williams’ recruiting process had a few twists and turns. He initially committed to Virginia Tech before his junior season. After a coaching change in the Hokies’ program, Williams decided to open up his recruiting again. Longwood was the first team to call him, and he then committed to Longwood in July.

“They stuck with me even after I decided to go to VT last summer,” Williams said. “They were constantly in contact with me over the last year.”

After finally signing off to make it official for Longwood, Williams said he was relieved and felt as if he had weight taken off of his shoulders. The size of the school and the people there stood out to him, he said, and he is confident he can come in and make an impact his freshman season.

The Nansemond-Suffolk Academy football team fell short of a playoff berth, but the Saints still were able to enjoy a... read more