Kevin Johnson was voted Suffolk News-Herald Player of the Week after rushing for 171 yards and a touchdown in a Warriors win over Grassfield High School.

“Explosive” could be a way to describe how junior Kevin Johnson plays. He can make big play after big play for Nansemond River High School’s football team with his speed. Every time the ball is in his hands, he is a threat to make positive things happen for the Warriors.

Last week, Johnson rushed for 171 yards and a touchdown in the Warriors’ homecoming win over Grassfield. He had set a goal before that game to rush for 100 yards, and he far exceeded that goal. He felt great about his performance and credits his teammates and coaches for putting him in position to be successful.

Johnson has felt good about his junior season up to this point. Outside of a few more games he felt the Warriors could have won, he feels personally he has improved on and off the field. He has learned a lot from his teammates and his coaches. The Warrior is an athlete that learns fast and makes smart decisions while also being coachable and playing very physically. 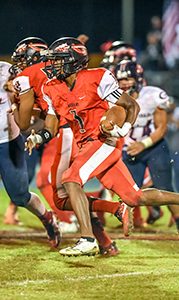 Kevin Johnson was voted Suffolk News-Herald Player of the Week after rushing for 171 yards and a touchdown in a Warriors win over Grassfield High School.
Sarah Murphy Photo

Nansemond River gets the ball to Johnson in the open field so that he can use his speed to threaten the opposing defenses. His playmaking ability has led to some victories for the Warriors.

Johnson’s motivation comes from his 8-year-old little brother, who is on the sideline every game.

“I know that he looks up to me,” Johnson said of his brother. “I try to do my best in anything to show him how it is supposed to be done.”

The Nansemond River junior pays attention to the media often, and he sees the talk about big-time players at the college level. He wants to be a big-time college player one day, so he uses the big-time players as inspiration. Los Angeles Rams wide receiver Tavon Austin is his favorite football player. Austin, like Johnson, is put in the open field to use his ability to help his team.

“We have the same type of traits on the field. He does it a little better than me, though,” Johnson joked.

Johnson did not really set any statistical goals for himself this season. Each game he just wants to step on the field and play his heart out for his teammates, and he feels he has accomplished that. In his spare time, the junior can be found in his books. Being a student-athlete is an essential part of who he is.

Nansemond River won its home first-round playoff game and will now go on the road to face Indian River High School in the second round. Johnson is excited about what was his team has been able to accomplish.

As the No. 1 seed in the 4A Region, King’s Fork High School took care of business with a blowout... read more