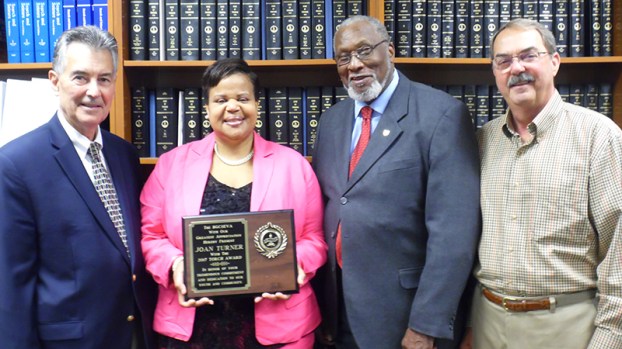 Joan Turner is presented the 2017 Torch Award from the Suffolk Unit of the Boys and Girls Club Advisory Board. From left are Commonwealth’s Attorney C. Phillips Ferguson, Turner, and advisory board members Leroy Bennett and Phil McPhail.

Joan R. Turner was honored recently by receiving the “2017 Torch Award” from the Suffolk Unit of the Boys and Girls Club Advisory Board.

Turner was honored for her commitment and dedication to the youth and Suffolk community as a whole.

Turner is a lifelong resident of Suffolk and a graduate of John F. Kennedy High School. She attended Virginia State University. She is the community outreach coordinator for the Commonwealth’s Attorney’s Office.

Turner is an active member of Oak Grove Baptist Church and her community involvement includes the United Way, Relay for Life, Suffolk Unit of the Boys and Girls Club Advisory Board, SMC Vision Inc., National Center for the Prevention of Community Violence, Suffolk Democratic Committee, and the Genieve Shelter Advisory Board, where she is a trained advocate.

“I was very surprised, humbled, excited and filled with joy, when I was presented the plaque entitled ‘2017 Torch Award’ from the Boys & Girls Club Southeastern Virginia,” Turner said. “This plaque reads ‘In honor of your tremendous commitment and dedication to our Youth and Community.’ I only do these things for the youth, because I know they all can be somebody special within their community and in their lives. I enjoy working with the youth, and I enjoy talking with them as well. Their future is very important and I like to assist them whenever and however I can.”

Turner has more than 20 years of law enforcement experience and is considered a forensic expert. She is a graduate of the Virginia Forensic Science Academy and is certified as a Department of Criminal Justice Services General Instructor, a member of the Virginia Homicide Association, and a member of the International Association for Identification.

Turner was a general instructor with the Hampton Roads Police Academy and has been a featured speaker at various schools throughout Hampton Roads and at colleges including Virginia Commonwealth University and Virginia State University. In addition, Turner has written an article for Forensic Magazine and was involved in an actual crime scene featured in a Scholastic book, “Guilty by a Hair” written by Anna Prokos.

Turner is currently in the process of writing a book evolving around the loss of her only son, Quantez Russell. The book will explain how she is dealing with the pain and grief of losing a child, as well as her hope of reaching others that are involved in gangs.

“Joan Turner is an outstanding person,” Commonwealth’s Attorney C. Phillips Ferguson said. “She has worked tirelessly for the Boys & Girls Club and for youth in general. She has a history of creating and presenting programs and has brought ideas and suggestions that have enhanced our community outreach program. Joan has implemented the Commonwealth’s Attorney’s Office’s first CSI Camp and Citizens Academy. She has taken the office’s community outreach program to the next level, which has greatly benefited the citizens of the city of Suffolk. She is truly an asset to our office and the people of Suffolk.”

Police are seeking the public’s help in identifying a suspect in an armed robbery that took place Friday evening. The... read more