The Healthy Families program celebrated 20 years of helping new moms and their babies during a ceremony on Oct. 27.

“It’s been amazing,” said Adriean Hawkins, who graduated from the program along with her daughter, Ny’Angel Allen. “They were always there for me. This has really affected me and my daughter in the most positive way possible.”

The Healthy Families program is a partnership among several health and social services related organizations that helps new mothers from the birth of their child until the child turns 5. It used to be geared toward first-time moms, but now any new mother who feels she could use some extra assistance is able to join.

Hawkins told the crowd gathered at Bethlehem Christian Church on the graduation day about how the program helped her and inspired her to continue her education and enter the health care field. 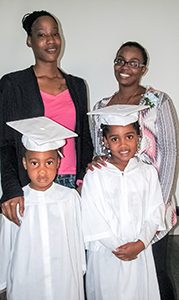 “This program really helped me in so many different ways,” she said. “They guided me in the right direction plenty of times.”

For a look back, 2008 Healthy Families graduate Samiya Smith spoke to the gathering. She recalled how the visiting nurse brought books for her when she was a child.

“Now, I love to read,” she said. “I am now in the International Baccalaureate program at King’s Fork High School. I have also made the honor roll.”

Smith said the program, which she participated in with her mother, Ebony Smith, was an important influence in her early life.

“No matter what, they are here to help you,” she said.

The words from the graduates had an obvious impact on the audience.

“It’s not a Healthy Families graduation without having to pass the tissue box and up and down the aisles,” joked Marli Laudun, director of the program.

Cynthia Smith said she received five invitations to high school graduations this year from some of the first families she had in the program. Four of those students are going to college, she said.

This year’s two graduates received bookbags filled with school supplies and other gifts.

Suffolk Public Schools has decided to lessen the amount of homework allowed for elementary school age students in its homework... read more