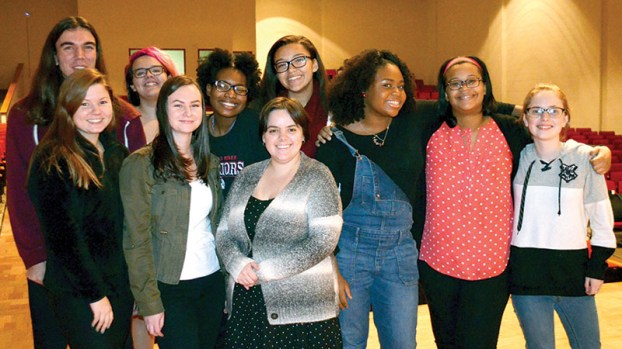 The students’ production won honorable mention for the state, ranking the program in the top 15 statewide.

They performed “Competition Piece” by playwright John S. Wells. The “play within a play” was a single-act, large-ensemble comedy about three groups of students — “preppies, arties and delinquents” — competing at a play festival, said senior Madelyn Alspaugh.

Senior MacKenzie Sheppard won Best Performer in State for her performance as Mrs. Mellencamp, one of the play directors in the story. Sheppard said she was amazed by the award and that she grew into her artsy, free-spirited character.

“Once I got more into the character, it got really fun,” she said. “I made it into my own role.”

Alspaugh played Mrs. Hockenshmoss, or Mrs. H. as they called her during rehearsals, she said. This character was serious and pressured her students for perfection, Alspaugh said.

She said she enjoyed playing a character that was stricter than she actually is.

“It’s fun to be something you aren’t,” she said.

Cox, however, played “Emma,” a character named after herself. Her character was a quirky, strange student that was determined to follow her director’s demands, including flailing her arms and running across the stage with a serious face, she said.

“It let me let out a lot of the adrenaline I usually have when I go on stage,” she said.

The students met three to four times weekly to rehearse and prepare for the competition, Neighbours said, and that training paid off when disaster struck.

During the performance, NRHS junior Amaya Wills tried to jump on top of a box with a prop sign on the small stage as part of the play. Wills accidently fell off the stage in the process, she said.

“I got back up, grabbed the sign and just kept going,” she said.

The students played it off and finished the play strong, Neighbours said.

“They’re taught that no matter what, you keep going,” she said.

The students also performed a “Disney Slam” sponsored by Disney Theatrical Productions at the VTA conference. Three actors from each of the competing schools were selected for the performance, Neighbours said.

Sheppard, Davis and Josey were selected for a song and dance routine for “Friend Like Me” from the movie “Aladdin.” Josey said it was fun, frantic effort to prepare for an ensemble piece in one hour that would typically require days.

“It was really fun,” she said.

Neighbours said the NRHS performing arts company will perform “The Lion King” in the spring and also compete in an upcoming Virginia High School League event.

Dozens of active and retired U.S. Marines gathered in Suffolk for an annual event of camaraderie and tradition on the... read more