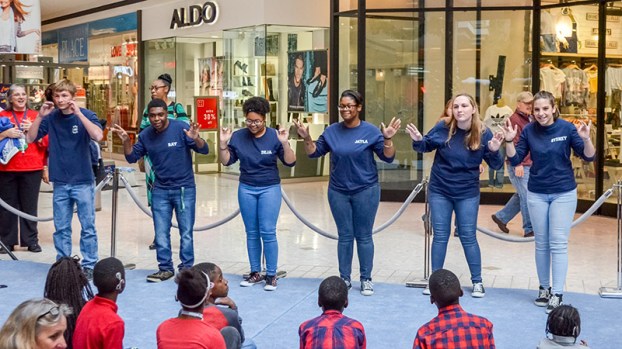 “Talking Hands,” the school’s American Sign Language Club, had been listening to “Frosty the Snowman,” “Silent Night” and other Christmas favorites for weeks to prepare for their performance on Tuesday.

According to senior Autumn Branch, 17, one of the more difficult carols was “Christmas Alphabets.”

“It’s a lot to remember, and it’s kind of fast,” Branch said.

The group signed for dozens of young children who are deaf or hard of hearing at “Signing Santa,” an annual event at Norfolk’s MacArthur Center mall. The kids were able to give Santa their wish list using American Sign Language, get their faces painted, eat cookies and enjoy Christmas carols.

“This is actually one of the few times they get to see their Christmas songs,” said Anita Fisher, Lakeland High School sign language teacher.

The students actually learned new signs by practicing these Christmas carols for many weeks, Fisher said.

“Signs they didn’t learn in class, they learned through these songs,” Fisher said.

The ASL club swayed to the Christmas carols while simultaneously moving their arms and hands, and the children repeated those moves as they laughed and cheered.

“The kids are so adorable,” Wilson said.

Wilson emphasized that their performance had to be “perfect,” which includes deliberate expressions that help convey what you’re trying to say.

The students kept smiles on their faces as they delivered holiday cheer to the small, happy faces in front of them.

“That’s why we’re really doing it,” Liverman said. “It’s for the kids.”

Virginia Beach resident Lauren Moore and her family brought her 4-year-old son, Wesley Moore, to the event. She said that they come to the event every year, and that her son loves Santa Claus, Christmas carols and being in such a warm, inviting atmosphere.

“He gets to be around other kids that have cochlear implants like he does,” Moore said about her son.

Overall, the performers of “Talking Hands” felt they successfully brought cheer to these kids.

“I think we did the best that we have ever done,” Stubenrauch said.

Recent accomplishments and high expectations were outlined at the State of the Schools Breakfast and Learning Fair held in downtown... read more