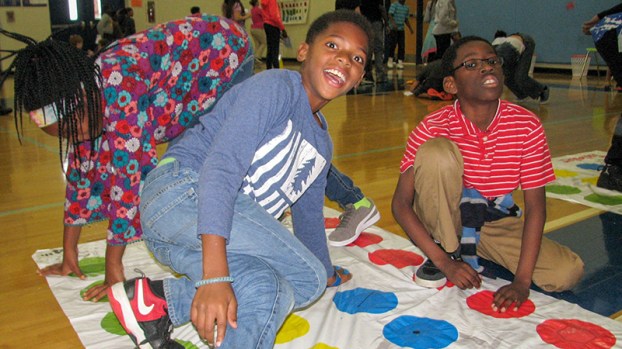 Students at Suffolk’s public elementary schools have been jumping into math lessons — literally — this month.

The Virginia Sports Hall of Fame has been bringing the Jump Start program to all 11 Suffolk Public Schools elementary schools in October and November. Students learn math concepts while they participate in various physical activities.

“It’s a fun, physical way for the kids to get to practice their math skills,” said LuAnne LaPoint, academic coach at Hillpoint Elementary School. “This is a really fun way they can put math into fitness and movement.”

On Nov. 6 at Hillpoint, fourth- and fifth-graders split into groups and visited stations that taught them skills such as fractions, place value, multiplication, telling time, shapes, graphing and measurements. At the same time, they were moving. 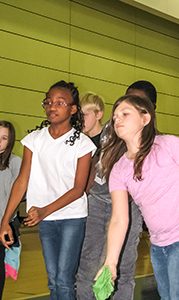 Amya Blaydes-Lewis and Lillian Mickle toss bean bags into a basket and prepare to make a graph of the number of baskets they made during the Jump Start program at Hillpoint Elementary School on Nov. 6.

At the graphing station, students were given five attempts to make a basket with bean bags and then graphed how many they made on a chart. At the shapes station, students played a modified version of the classic game “Twister” but placed their hands and feet on the shape that was called out, rather than the color.

“They get to move while they learn about math,” Hillpoint Principal Catherine Pichon said. “It helps them remember the information better, and it’s fun.”

“It’s a great program for the kids, because it’s definitely something they’re not used to,” she said. “At first, they’re not too sure, but by the end they’re so excited they don’t want to leave. They are using the math skills and having fun with the math skills.”

Kirk said one of the new games this year asks students to push shuffleboard discs and then measure the distance their disc traveled with measuring tape. Many teachers are realizing their students need more practice measuring longer distances, she said.

Students enjoyed the program, too.

“I’m learning how to do stuff I didn’t know before,” he said.

Donate shoes to give holiday cheer

This holiday season, your shoes can make a difference. No matter the size, style or color, the Women of the... read more