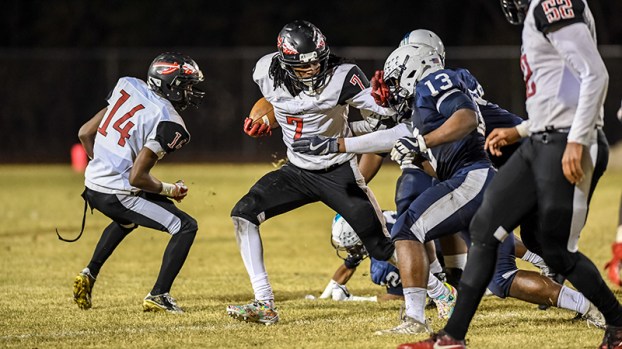 The Warriors continue to roll in the playoffs. On Friday they went on the road and defeated Indian River 35-21. It was a big win for a Warriors team that continues to write a new chapter to their season with each week.

At halftime, Nansemond River had a 14-0 lead despite a number of turnovers. The Warriors had many turnovers throughout the course of the game, but because of their high-level play, they were able to mask their mistakes.

“I was pleased with the way we were able to fight through adversity,” Warriors coach David Coccoli said. “I think that is the sign of a good football.”

Indian River fought back and tied the game at 14 with two third-quarter touchdowns. But Nansemond River took control in the fourth quarter with a 21-point effort.

Stringer and Marcel Lewis added rushing touchdowns, and defensive back Quincy Gregg sealed the deal for Nansemond River after he returned an interception for a touchdown.

The Warriors attempted only one pass the whole game. Kevin Johnson added 100-plus yards rushing, giving Nansemond River 408 rushing yards for the game. The team’s rushing has been the bread and butter for the Warriors all season.

The 5A Region championship is set, and it will feature Nansemond River and Salem High School. Once again, the Warriors will have to go on the road.

Coccoli said that his team doesn’t want to be satisfied with just these two playoff wins. One of its goals for the season was to be practicing on Thanksgiving Day, and now they will as they turn their attention to Salem.

“We are excited about the opportunity that’s in front of us,” Coccoli said. “We have a chance at a regional championship. This program has not had anything like that in a long time. We are a good football team. We have had some adversity this year, and now we are starting to peak at the right time.”