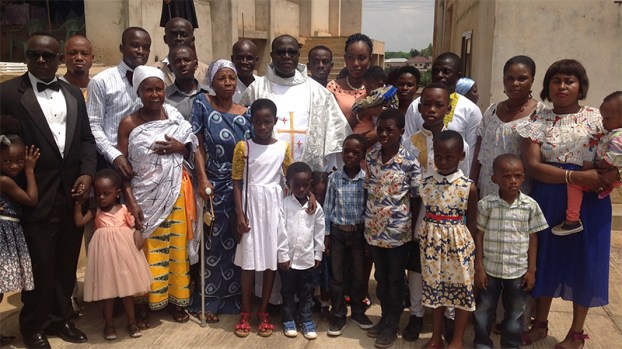 Father Emmanuel Mensah, pastor of St. Mary’s Catholic Church, spent time in Ghana this summer with some of his family after celebrating his silver anniversary as a priest.

The Catholic church at 202 South Broad St. is dedicated to the mother of God, so it is fitting that its history began with the faith of three devout Suffolk women.

The first of these, Katherine Woodley Holland, brought Catholicism to Suffolk in 1836. Hostility toward Catholics in Virginia went back to the time of the colonies, and as the only Catholic in Suffolk, she must have endured some of those hardships herself.

Indeed, even after religious equality became part of the U.S. Constitution, a long period of persecution, economic and social pressures, and an insufficient number of priests all took a heavy toll on the Catholic Church in Virginia.

Nonetheless, Katherine imbued her daughter, Elfrida, with a devout and tenacious faith, and Elfrida’s own daughter, Katie, inherited a double dose of evangelistic spirit from her mother and grandmother.

It was in Elfrida’s farmhouse home on Holladay Street that the first recorded Mass was celebrated in 1873 by Father Thomas J. Brady of St. Paul’s in Portsmouth.

Elfrida opened her home to Father Brady for Easter Mass every year. The diary of her daughter Katie records that confession was heard in one room, with the priest sitting in a chair and the penitents kneeling on the floor; and Mass was said in the living room, where sheets and a white linen cloth were draped over a bureau to serve as the altar.

For 30 years, during which time she moved to Pinner Street and then to North Main Street, Elfrida continued to offer her home for Easter Mass. In 1902 Father Brady baptized the baby of Mr. and Mrs. Patrick O’Malley, a farming family that lived on White Marsh Road. It was the first Catholic baptism in Suffolk.

In 1903, the Very Rev. Felix Kaup, who was stationed in Portsmouth, began to minister more frequently to the approximately 25 Suffolk Catholics, coming every three months to say Mass.

Because the congregation was now too large for a private home, Father Kaup arranged to use the old Academy of Music for Mass, with an empty box as the altar and the communicants kneeling in a semicircle on the stage.

In 1908, Katie Crowder organized the original St. Mary’s Women’s Club — then called the Ladies Aid Society — and went door to door asking for donations to build a church for the 20 Catholic families here.

After almost 100 years under the care of priests from St. Paul’s, the Rev. Joseph Brennan was appointed St. Mary’s first resident pastor in 1927. Under his tenure, a rectory was purchased, and St. Mary’s established missions in Courtland and Sebrell.

In 1929, the Rev. Philip Blackburn became pastor and extended St. Mary’s missions to Franklin and Smithfield. During the next decade, the number of parishioners at St. Mary’s continued to grow.

By the time Father Julius Schmidhauser became pastor in 1944, the parish had grown both spiritually and materially. A beautiful altar and tabernacle were purchased, and in 1948 Father Schmidhauser began a drive to raise funds for a new church building.

Five years later, Father Joseph Leitch broke ground for a new and larger church on South Broad Street. The original white wooden church, built as a mission of St. Paul’s in Portsmouth, was moved around the corner on Smith Street where it was used for education and social events.

On Sept. 12, 1954, Bishop Peter Ireton dedicated the new church that was designed to seat about 240 people, two and a half times the seating capacity of the original church. In 1975 a new two-story education building was dedicated, replacing the old mission church where the first few Suffolk Catholics worshiped.

St. Mary’s Italian mosaic of the crucifixion is formed by more than 50,000 half-inch squares of colored glass. It hangs behind the high altar at 11 feet tall and 9.5 feet wide. Together with three other mosaics — Our Lady of Fatima, Our Lady of Perpetual Help and the Lamb of God mounted on the high altar — the French stained glass windows, and the Italian hand-carved Stations of the Cross, the features set this church apart.

St. Mary’s current pastor, Father Emmanuel Mensah, hails from Ghana. He has been pastor for two years, and last month his parishioners threw a party to welcome him back from Ghana, where he had celebrated his 25th anniversary as a priest.

“I have been very pleased by life in the United States,” Mensa said recently. “It is a beautiful country, and the American people are also beautiful.”

“I particularly love the family character of St. Mary’s,” he added. “It is small enough so that parishioners know each other, work together and are bound by a beautiful love for each other as sisters and brothers in Christ.”

With three different recounts still to come in the Virginia House of Delegates elections that took place Nov. 7 and... read more