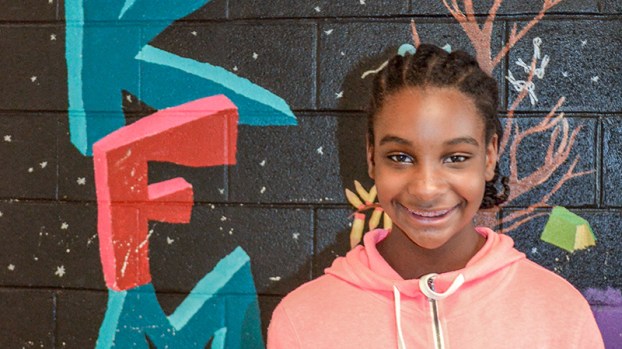 A Suffolk middle school student helped make a winning phone application for a competition, and then enjoyed a conference surrounded by other girls who shared her interest in technology.

King’s Fork Middle School sixth-grader JaKyra Woodall, 11, was one of about 60 girls from across Hampton Roads to attend the Capital One Coders Experience Challenge at Tidewater Community College’s Virginia Beach campus on Oct. 14.

The event drew middle-school students for problem-solving exercises in hands-on learning labs meant to show them careers in technology fields, according to the Hampton Roads Innovation Collaborative website.

Teams of girls were tasked with designing and coding apps, and JaKyra worked with Emily Schieder, a student of Virginia’s K-12 online classes, to make an app that everybody would want to use, JaKyra said.

The pair came up with “E-Closet,” a phone app that allows users to photograph their wardrobes, and use the photos to coordinate matching outfits based on color choices and the season, JaKyra said.

The app ranked in the top three for the competition. They were then invited to attend the Women in Technology Experience conference in Richmond on Wednesday.

Debbie Sterling, the founder and chief executive officer of GoldieBlox, a multimedia company that encourages girls’ interest in engineering and technology, was a guest speaker, along with Virginia Secretary of Technology Karen Jackson.

JaKyra described exercises with motherboards, taking apart computer monitors and getting to meet other girls with similar interests. She even got to find out more about them with a game that had each girl share something about themselves, but only in Morse code using a flashlight.

“Everybody said one thing about themselves, and we had to figure out what that thing was,” JaKyra said.

She said she liked meeting an interactive robot called Piper and watching a dance group perform in suits covered in lights that were coded to blink and change.

“They coded them to change colors and move around,” JaKyra said. “It was interesting.”

JaKyra’s parents Jacindia Woodall, a fifth-grade teacher at Hillpoint Elementary School, and Luther Woodall have encouraged their daughter’s interest in technology since Jacindia Woodall did a coding lesson with her daughter on the Khan Academy website about a year ago.

“She fell in love with it and has been doing it ever since,” Jacindia Woodall said.

JaKyra plans to attend the conference again next year, she said. In the meantime, she’ll keep practicing with weekend lessons on Code.org and learn new ways to make games and debug applications.

“I like that I can make games for my friends and I to play, and fix apps that have bugs in them,” she said.

Shelley Barlow and her family were harvesting their cotton crops in the damp air and mud on Wednesday. Like other... read more