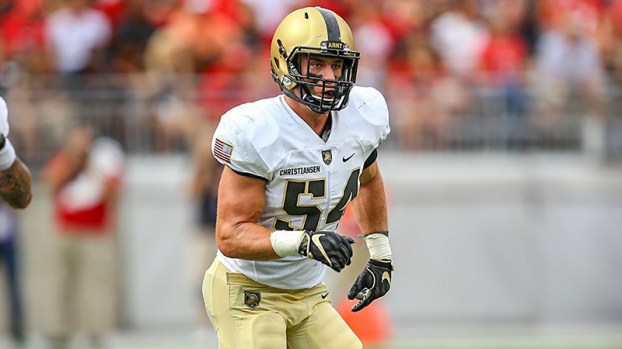 Cole Christiansen is second on the team for Army in tackles with 73. He also has one interception on this season. Army media department

Cole Christiansen has taken advantage of his opportunities at Army.

Christiansen has been having a very good season after being named a starter in August. He is currently No. 2 on the team in tackles with 73, which includes five tackles for loss. He also has one interception.

Christiansen has notched 10 tackles in two games this season, one against Air Force and the other against Duke University. His play against Duke on Nov. 11 earned him a spot on Pro Football Focus National Team of the week. He graded out as the third-best linebacker in the country for that week with a grade of 91.1 after his performance against Duke, according to PFF’s grading system.

Army is currently 8-3 and has clinched another bid to a bowl game once the regular season is over. Christiansen has been a pleasant surprise to the Army defense and coaching staff in his first year starting, after the team lost significant production due to graduation.

The former Nansemond-Suffolk Academy standout was a state Defensive Player of the Year in his time there and also helped NSA to a state championship victory.

Nansemond River High School and King’s Fork High School both will be competing in the regional championships in their respective... read more