The Suffolk native and Atlantic Shores Christian School senior basketball standout described his recruiting process as stressful and exciting at the same time, noting that a lot of people were making suggestions to him. However, his mom’s opinion held the most weight, since she has played an essential part in his success.

“I had a lot of different people making suggestions on where I should go,” Dickerson said. “I feel relieved now that I have made my decision.” 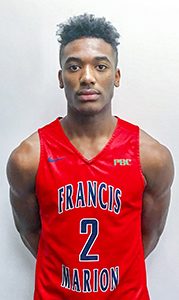 FMU let Dickerson know that he was a priority. They made him feel not only wanted but that he was a need for their program, and that is the main reason why Dickerson felt like committing there was going to be best for him.

“They told me I was at the top of their recruiting list and that if I went there, I should play right away,” Dickerson said. “Also, the school has my major, and it is away from home.”

Dickerson will be majoring in business and wanted to be out of the state. FMU is located in South Carolina.

Even though Dickerson plays at Atlantic Shores, he attended King’s Fork High School his freshman and sophomore years and still resides in Suffolk.

With basketball season now under way, Dickerson is excited about the opportunity to focus on finishing his senior year strong. His goals include becoming a better leader for his team in hopes of guiding it to a state championship.

He wants to average a double-double for his team and hopes that leads to a Player of the Year award in his conference. Last season, Dickerson averaged 17 points.