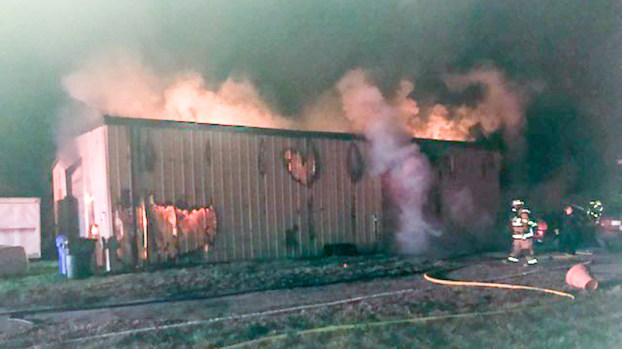 Firefighters battle a fire in a metal shop building attached to a residence on Manning Road late Monday. City of Suffolk Photo

A shop building attached to a home on Manning Road was destroyed in a fire late Monday.

The fire in the 4800 block of Manning Road was reported at 11:25 p.m., and the first units arrived 10 minutes later, according to a city press release.

Firefighters found a large, metal shop building attached to a single-family residence. The shop was engulfed in flames, and the fire extended into the attic of the residence.

The shop was destroyed, but firefighters were able to minimize damage to the home, according to the city press release.

The residents of the home evacuated prior to firefighters’ arrival. A man suffered minor injuries attempting to open a metal door. Firefighters treated him on the scene.

Firefighters rescued a cat and two dogs from the flames.

The family of three was displaced and is receiving assistance from the American Red Cross.

The fire was called under control at 12:48 a.m. The Fire Marshal’s Office is investigating the cause.

The Suffolk Police Department is seeking the public’s assistance in locating a runaway juvenile, according to a city press release.... read more