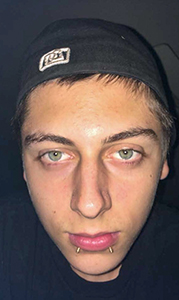 The Suffolk Police Department is seeking the public’s assistance in locating a runaway juvenile, according to a city press release.

Devin James Doyle, 17, was last seen at his residence in the 1300 block of Lakeland Trail on Nov. 15, according to the press release. He left on foot after having a disagreement with family.

His whereabouts are presently unknown, the release stated. However, he is reported to have been seen in the downtown Suffolk area.

Devin is 5 feet, 8 inches tall and weighs 120 pounds. He has brown hair, blue/green eyes, a fair complexion and piercings under his lip area. He was last seen wearing a black Carhartt jacket with bleach spots, black jeans, and may be wearing a gray beanie.

Devin has a medical condition that requires supervision. If you see him, call 911 or your local police department.

A Suffolk high school student has been rewarded for his ambition, generosity and love of golf. Gerry Jones Jr., 16,... read more