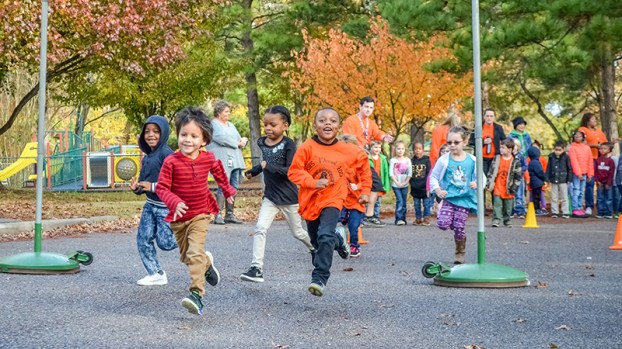 Students at Kilby Shores Elementary School got out of their classrooms for a mile of fun during their last school day before Thanksgiving break.

The school held its first Turkey Trot on Wednesday with the help of local volunteers dressed in orange T-shirts made for the occasion. More than 500 students from pre-kindergarten to fifth grade ran or walked a mile around the playground, baseball diamond and basketball court.

“If you want to walk then walk, or if you want to jog then jog, but do the best you can,” physical education teacher Austin Kulp said to one group of children.

Groups of students raced as fast as they could past decorative signs that pointed the way.

“It was tiring me out,” said 6-year-old kindergartener Charlotte White.

“It’s just to make them run faster, and to run the whole thing without walking,” 10-year-old Jeremias said.

Parents were invited to join their kids for the activity. Johanna Arocho was with her son Jeremias, who attends the school with three of his eight siblings, she said.

“They love this kind of stuff,” said Johanna Arocho.

Kindergartener Ainslee Joyner said she was excited to get out early from school on Wednesday, to help out with her family’s big Thanksgiving plans, and to end her short school day by laughing and running around.

Some parents appreciated the opportunity to spend time with their kids before the hustle of the holidays.

“It’s nice little family time at the school,” said Melissa Menezes, who was at the race with her husband, Adriano, their twin 1-year-olds, Lucas and Levi, and their kindergartner, Olivia, 5.

Principal Lorri Banks said the activity was meant to encourage the children to stay active during their time away from school this week.

“It keeps good fitness in mind so that when they’re off, they’ll remember to keep moving,” Banks said.

Despite some wet grass and dirt and a slight chill in the air, the weather was a good fit for running outside, according to Adriano Menezes.

“It gets them outside to enjoy the weather before it’s cold,” Adriano Menezes said.

The Turkey Trot also capped off the school’s canned food drive that loaded each grade level’s respective collection box, Banks said. These donations will go to the Salvation Army.

“We’ll continue to collect throughout the holidays,” Banks said. “We’ll attach this to Toys for Tots and for when we do the coats also.”

Kulp spearheaded the activity day with the help of volunteers and staff, including Penny Key, Sue Rimasse, Angie Salerno and Allison Greene, who helped with resources and coordination, Kulp said.

“Any opportunity to get the kids more physically active throughout the week is important. I think it’s important for their health, and also for them to have fun and enjoy themselves,” he said.

A new shop in North Suffolk is making a splash through convenient service and a tasty selection of beverages. Amberly... read more