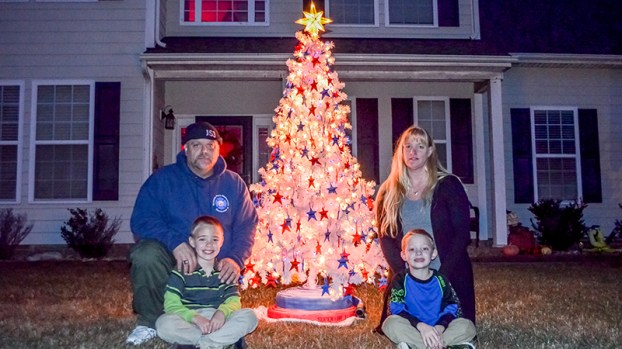 Norfolk Naval Station Fire Department Capt. Bill Price and his wife Cindy Price with their sons Keegan, 8, and Gavin, 5, beside the family’s Fallen Heroes Tree in front of their Suffolk residence.

Bill Price and his family have been painting star ornaments red and blue for their 6-foot-tall, white Christmas tree, which is the only decoration in their front yard in Suffolk.

According to Price, there are more than 200 stars on the tree. Each represents a firefighter, police officer, corrections officer or someone else that gave their lives in the line of duty since January, with their names, departments, and dates of death written in black.

“It gives it a different meaning than just looking at a name on a piece of paper,” Price said.

The Fallen Heroes Tree is the Price family’s vigil for those that made the ultimate sacrifice, and the latest effort by Price to honor and remember men and women that served others.

He also honors firefighters by participating in 9/11 memorial stair climbs, in which participants pay tribute by climbing or walking the equivalent of the 110 stories of the World Trade Center.

Price is a captain in the fire department at Naval Station Norfolk and has more than three decades of firefighting experience, he said. His brother, Stephen Price Jr., is a deputy for the Dutchess County Sheriff’s Office in New York, the same department from which their father, Stephen Price Sr., retired as a detective after a 40-year career.

“I think he would be pretty honored to see something like this up,” Bill Price said about the memorial tree.

The Price family has worked since Halloween to make the stars, paying close attention to the news for any more names, Price said.

“Hopefully, we won’t have to add any more,” Bill Price said.

His wife, Cindy, sees the aftermath of dangers in this field of work first-hand as an emergency room nurse at Bon Secours Maryview Medical Center in Portsmouth.

Among the names are Virginia State Police Lt. H. Jay Cullen and Trooper-Pilot Berke M.M. Bates, who were killed when their helicopter crashed on Aug. 12 outside of Charlottesville while monitoring a white nationalist protest.

There are also the names of 23 police officers and firefighters that passed away this year from cancer-related conditions resulting from their service following the terrorist attacks of Sept. 11, 2001, Bill Price said.

“This is their families’ first Christmas without them,” he said.

Price said he wanted people to remember these men and women, respect their service to citizens and reflect on the dangerous callings.

“We’ve had messages thanking us from as far away as the (United Kingdom),” Bill Price said.

A lighting ceremony will be held at 7 p.m. on Thanksgiving Day at their 2000 Brians Lane residence. Price said the tree will remain a fixture until about the weekend after New Year’s Day.

Until then, everyone is welcome to come and honor those written on the stars.

“If an officer wants to come up at 2 a.m., they’re more than welcome,” Bill Price said. “We may even come out and say hi, if we see you.”

A shop building attached to a home on Manning Road was destroyed in a fire late Monday. The fire in... read more