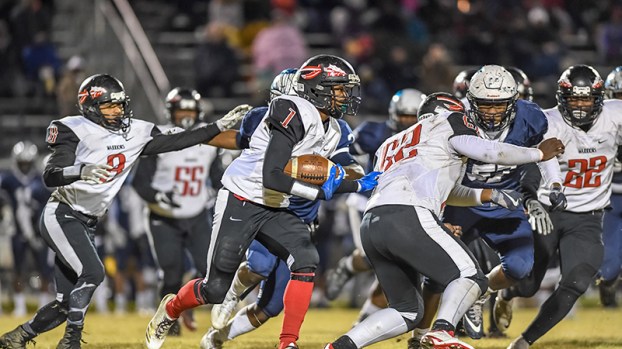 Junior Kevin Johnson gets up the field for the Warriors in a prior game while his teammates lead the way. Nansemond River High School will go on the road to face Salem High School at 7 p.m. Friday. Sarah Murphy Photo

Two Suffolk teams will try to earn themselves a state semifinal berth this Friday.

The Bulldogs are coming off of a big 37-14 win over Smithfield High School. Though the score doesn’t reflect how the game went, the Bulldogs believed they could have played a better game. A second-half surge helped them advance to the regional championship. Now they will take on a red-hot Rams team that has been equally on fire.

After losing their first game of the season, the Rams have won 11 straight games and will try to make it 12 when they travel to Suffolk on Friday.

“We have our work cut out for us,” Bulldogs coach Scottie Littles said. “They are really disciplined. The coach has done a good job with that program and that community up there.”

Lafayette runs a Wing-T offense. Wing-T is a run-based offense that has different variations that can confuse a defense. The Rams averaged 51 points over their last three games.

Littles knows his team will have to be more than prepared for anything they may see out of that offense. In the playoffs, the Bulldogs have only allowed 21 points in two games combined.

“We have to be disciplined and pay attention to detail,” Littles said. “They are athletic, big and strong. It is a reason why they’ve been in this situation in years prior.”

On the other side of the coin, the Lafayette defense will have to account for an explosive King’s Fork offense. The Bulldogs have averaged 54 points during their two playoff games. Darran Butts scored on a 35-yard touchdown run last week, but other than that it was hard for him to get going as teams are focusing on slowing down the Southeastern District Offensive Player of the Year.

However, Justin German can also make plays for the Bulldogs. The first-team Southeastern District quarterback has tossed eight touchdowns in the playoffs already. King’s Fork has experience in games that have turned out to be shootouts and will be prepared this Friday if it comes down to it. Last week, Sam Dunn and Dennis Whitehead added two touchdowns a piece for the Bulldogs.

King’s Fork has already done many things for the first time this year. They have the best record in school history, a district title, hosted and won a home playoff game and earned a No. 1 seed in the region. However, they don’t want it to stop there.

“Our kids have done a good job of not resting on these things and knowing that we have a bigger goal,” Littles said. “We are not just OK with being here. Those kids know what it took to get here, and they are learning what it takes to win in November.”

The Warriors have been rolling as of late, as they are currently on a four-game winning streak. Last week, Nansemond River surprised many by going on the road and dismantling an Indian River team that most considered the favorite out of the 5A Region.

Not only did the Warriors win that game, but also they overcame a slew of turnovers throughout that game and remained poised. After the game, Warriors coach David Coccoli said he believes he has the making of a good team when you can overcome adversity throughout the game.

Defensive back Quincy Gregg, who had a pick-six last week, described the feeling that the Warriors are playing for a state tournament berth as unbelievable.

“These guys on this team worked so hard for this,” Gregg said. “I am just glad to see it pay off.”

Salem is on a three-game win streak of its own. Last week, the team defeated Hampton High School, the No. 3 seed, in low-scoring 7-6 contest. Salem has been averaging 17.5 points per game in its two playoff games that have been at home. Last week against Hampton, they had less than 150 total yards, but when their defense needed a stop, they got it.

The Warriors will walk into the regional championship game with a versatile running game. Against Indian River, they rushed for 408 total yards. Gerard Stringer led the way, rushing for 186 yards and two touchdowns. Nansemond River has a multitude of runners to mix into their rushing attack. Kevin Johnson, Wali Faulk and Marcel Lewis all provide a different dynamic in the Warriors’ ground game. They threw only one pass last week. Stringer, who gets it done on the defensive side of the ball as well, likes showing versatility to help his team win.

“I always want to be versatile, but I’m also willing to do anything my team needs me to do to help keep winning,” Stringer said.

Salem will be tough to beat at home, but Nansemond River has shown that if they execute the way they have the last two weeks, it will be hard not to see them secure the Class 5 Region A championship.

Nansemond River will be at Salem at 7 p.m. Friday.

With basketball season now upon us, some teams will have a different look when they step on the floor, and... read more