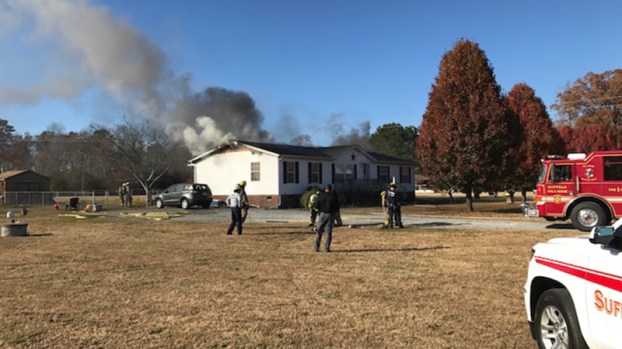 A fire on Manning Bridge Road displaced a family of four from their home on Friday.

Four people displaced from their home following a fire on Friday afternoon.

The fire in the home in the 700 block of Manning Road was reported at 1:29 p.m., and the first Suffolk Fire & Rescue units arrived on scene at 1:36 p.m., according to a city press release.

Firefighters found heavy smoke showing from the single-story residence when they arrived but were able to knock the fire down fairly quickly. The residents had evacuated prior to their arrival.

The fire was called under control at 2:12 p.m. Fire damage was confined to the attic space and the exterior wall at the rear of the home, according to the release.

There were no injuries. Staff and equipment from Chuckatuck Volunteer Fire Department backfilled the station during the response.

A portion of Manning Bridge Road was closed while firefighters were on scene.

The cause of the fire is undetermined at this time, and the Fire Marshal’s Office is handling the investigation.