The Nansemond-Suffolk Academy girls’ basketball team will look to surprise people in a rebuilding year.

NSA went 15-11 last season, which ended in a state tournament loss to Seton School. They lost a crop of seniors who were very productive from last year’s team, most notably frontcourt standout Kelly Hogan, who averaged a double-double for the Lady Saints. They also lost solid contributors in Lindsay Knierbein and Logan Harrell.

“I think it will be a little bit of a rebuilding year, but we are hoping by midseason we will be competing with everyone in our league,” Aston said.

Last season, NSA was expected to have a rebuilding year but far exceeded expectations. While NSA expects to have a similar type of season this year, they are hoping that the magic from last season will carry over into this season. 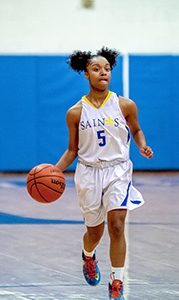 Kaylah Brown returns as one of the Lady Saints’ top contributors to the girls’ basketball team for this season.
Sam Mizelle Photo

“Last year was a bit of a surprise, and this year I think we could have something similar,” Aston said. “It always helps to be better than what people think you are going to be when you step out on the floor.”

It will all start with the returners leading the way for the Lady Saints. Senior Kaylah Brown is a talented guard who transferred last season and will be in her second season under Aston’s program. She had a strong summer and is garnering interest from college programs. Aston believes Brown is the best guard in the Tidewater Conference of Independent Schools.

NSA will also return Abby Herrod and welcome back Olivia Giles. With Kelly Hogan’s presence last season, the NSA offensive was centered around a four-out-and-one-in concept, meaning there were four guards around the perimeter while Hogan was inside.

Without Hogan, NSA will continue that offensive philosophy but will make certain adjustments.

“We have some young players who can play in the post position. We will see how they develop as the season goes on,” Aston said. “Because the players are so young, sometimes you just won’t know until you step on the floor.”

NSA will officially kick off its season at home on Nov. 30 against Cape Henry Collegiate. Cape Henry will be considered among the top girls’ basketball programs in the TCIS this season. Last season, NSA defeated Cape Henry twice. Aston feels to open the season against them will be a good opportunity to dive in head first.

“It is always an exciting time of the year once basketball season starts,” Aston said. “It is always going to be tough matching up with your conference rival early in the season, but you might as well jump in and get rolling.”