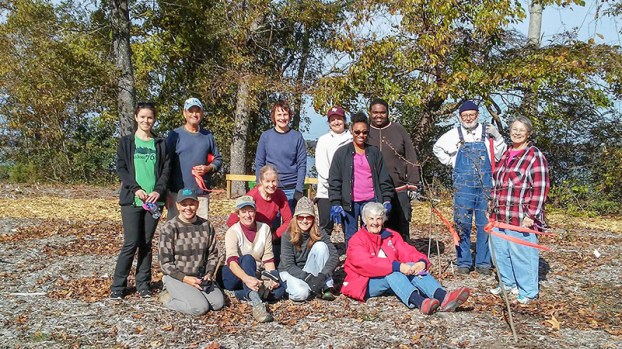 Volunteers pause for a photo during their work at Sleepy Hole Park on Saturday for phase two of the Native Plant Demonstration Site Project by the Nansemond River Preservation Alliance.

More than a dozen volunteers from the Nansemond River Preservation Alliance, Suffolk high schools and elsewhere toiled by the pier at Sleepy Hole Park for an ongoing buffer project by the Nansemond River, according to NRPA President Elizabeth Taraski.

The volunteers were met by favorable weather conditions after they started digging and planting early Saturday morning, Taraski said.

“It was absolutely beautiful,” she said. “Blue skies, a little chilly when we first started, but eventually we took off layers and the winds were light.”

They planted 35 trees and large shrubs native to the region as part of the second phase of the NRPA’s native plant demonstration site by the park’s pier, Taraski said.

Similar to plantings at Bennett’s Creek Park, these relatively larger plants will act as natural filters for stormwater runoff from heavy rainfall. Eventually, these will be labeled with more information to inspire visitors to plant them on their own properties, Taraski said.

“They’re resilient, they require less water most of the time, and they’re habitats for pollinators,” she said.

Educating students and residents about the benefits of native plant species is one of the goals of the major project, she said. Parks and Recreation principal planner Mike Kelly will support that by designing a walking path through the area, providing a scenic view of the native foliage and the Nansemond River.

A group of volunteers from the Navy will remove invasive plant species and plant more favorable natives on Dec. 1 to keep things going, she said.

“The plan is to extend it all the way along the Nansemond River part of Sleepy Hole Park,” Taraski said. “We’re about 60 percent of the way towards that goal.”

A new shop in North Suffolk is making a splash through convenient service and a tasty selection of beverages. Amberly... read more