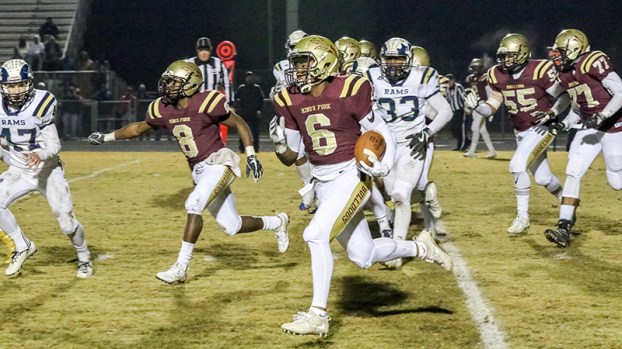 The Bulldogs’ impressive season came to an end on Friday after a regional finals loss.

King’s Fork High School took a 17-7 home loss to Lafayette High School, which ended King’s Fork magical season. With the loss, the Bulldogs finish their season at 11-2, which is the best record in the program’s history.

The Bulldogs fell behind 7-0 in the first quarter. Heading into halftime, the Rams maintained the 7-0 lead.

But in the third quarter, Lafayette built its lead to 14-0 over the Bulldogs. King’s Fork got on the board late in the fourth quarter, but there wasn’t enough time for them to mount a proper comeback. 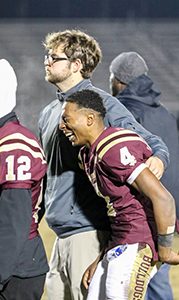 “We played hard,” Bulldogs coach Scottie Littles said. “We contained them for most of the night, but we did not execute on offense like we should have, and it came back to haunt us. I’m so proud of those guys. It hurts and stings, but these guys accomplished some incredible things.”

After the game Friday, Littles reiterated to his players that they had built a foundation that others will have to live up to. Last season, the Bulldogs finished 4-7 with a first-round exit in the playoffs. The growth of the year has been something Littles and his coaching staff have embraced.

“They didn’t become just better players over this past year, but they became better people,” Littles said. “They became better teammates, better sons and better brothers, and that is what it is all about. The relationships we have built with these kids will last a lifetime.”

Before the season started, the Bulldogs had their first goal digging event. The team put their goals in a zip-lock bag and buried them close to their practice field. It consisted of goals from everything off the field such as academics to on field such as championships. Littles said confidently he felt his players accomplished all of their goals, except for that state championship.