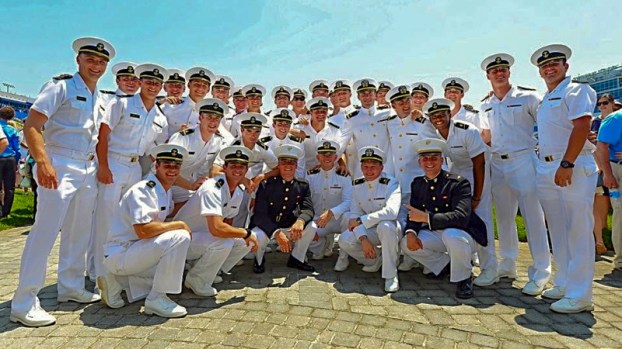 This picture was taken on graduation day for the Class of 2016. These were some of Paul Spalding's baseball friends from that year.

Paul Spalding wasn’t entirely free of academic duties this Thanksgiving break. As a senior cadet at the Naval Academy in Annapolis, he’s been assigned to do something akin to recruiting, and it’s an honor for him and other midshipmen to reach out to potential servicemen and women.

Last week, Spalding visited Nansemond-Suffolk Academy, Lakeland, Windsor and Southampton high schools, the latter of which he graduated from as valedictorian in 2014. Students at all four schools heard of his firsthand experiences, as well as the opportunities that await them in the military. 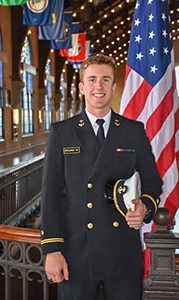 “The Western Tidewater area has a lot of potential,” he said. “Students from Southampton, Windsor, Isle of Wight and surrounding schools go on to great schools, but few even apply to service academies. The Naval Academy — and the military in general — needs intelligent, athletic and moral leaders to fill the ranks.

“There’s a lack of information about the Naval Academy, and I’ll be bringing information to future students and get them interested in the military,” he added.

Spalding said there are many summer programs that can introduce potential recruits to their possibilities. Those include one focusing on science, technology, engineering and math, as well as a summer seminar, which he described as a “Naval Academy crunch in one week for juniors; they live the life of a midshipman.”

During his own time at Southampton High, Spalding said, he was a member of the National Honor Society, the Beta Club and the Leaders Club of the YMCA. In athletics, he lettered in baseball and basketball, winning in district tournaments and getting all-region nods in basketball.

His skills in baseball got him recruited to play for the Navy a couple of years, but a shoulder injury cut that career short.

On finishing SHS, Spalding enrolled in the renowned academy for different reasons.

“It was a combination of things,” he said. “It’s a really good school, and I want to serve my country. I didn’t want the traditional university route. I needed a challenge.”

A son of Dr. Harry and Rebecca Spalding — dentist and pharmacist, respectively — he’s also the younger brother of Harrison, who’s in graduate school. Military background comes from the parents’ respective fathers. Spalding’s paternal grandfather was an Army paratrooper, and his maternal grandfather served 22 years in the Navy.

Spalding is up early each day for fitness and academics. As an upperclassman, he is expected to lead the younger classes by example.

“Something is always going on,” he said.

“I really like that technical aspect of what’s needed to fly — the math and science,” Spalding said, adding that he imagines being in the air will be exciting and rewarding.

Learning to fly and the required service will mean several more years of commitment, and Spalding says he’s prepared for it.

For more information about the Naval Academy, visit www.usna.edu.

New shopping and dining options on Harbour View Boulevard are on their way to opening next year. Construction crews are... read more