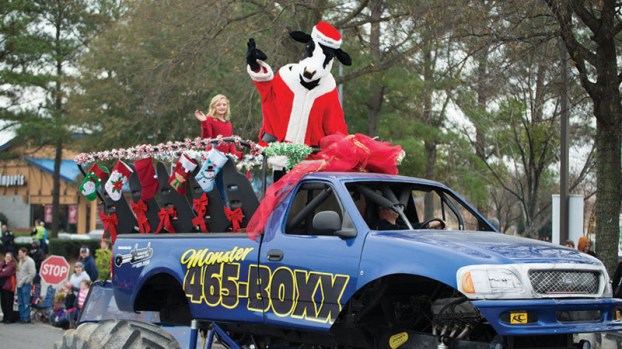 The Chick-fil-A cow waves from one of the vehicles during a prior year of the annual Chick-fil-A Christmas Parade at Chesapeake Square Mall. (Submitted Photo)

Sean Hess, owner and operator of the Chick-fil-A by the mall, started the event years ago with former marketing director Andrew Riddick as a way to engage the community.

“We just figured, if we’re going to do something, we’re really going to do it big and kind of own it, so we just came up with the idea of doing a Christmas parade,” Hess said.

More than 50 participants have paid the $35 entry fee for the parade this year, he said. This money will go to compensate the six off-duty Chesapeake police officers that will help direct traffic, along with other expenses.

The theme for this year’s parade is “Do you want to build a snowman?” according to Hess. He described sights of previous years, including modified golf carts, hot rods and Portsmouth Humane Society dogs.

“They walk the dogs in the parade, just to raise awareness that these dogs could be adopted,” he said. “It’s a little bit of everything.”

Hess has operated at Chesapeake Square for 28 years, starting with eight years at the Chick-fil-A inside the mall and then at the Portsmouth Boulevard location, he said. The judges’ awards, live music and other festivities are for this supportive community.

“It’s giving back to the community that’s supported us so graciously for 28 years now,” Hess said.

The parade will be held from 8:30 to 9:45 a.m., and Chesapeake Square Ring Road will be closed from 6:30 to 10 a.m. The mall can be accessed from Portsmouth Boulevard via Capri Circle, between the Wendy’s restaurant and UPS store.

Hundreds of people got in the holiday shopping mood and supported local businesses during the {Re}Stored Downtown Pop-Up Shop Initiative... read more