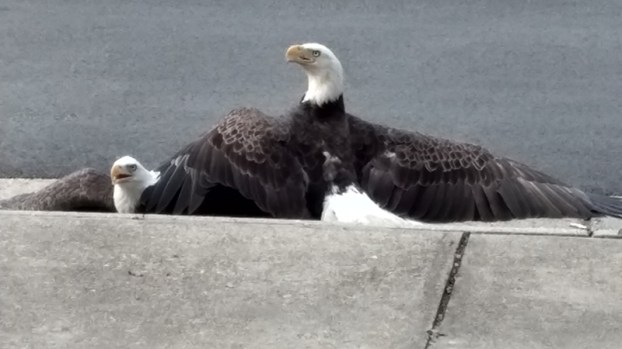 Jennifer McCusker was able to snap a few photos of bald eagles that fell into her Burbage Grant driveway on Tuesday afternoon.

Eagles crash in on homeowner

A North Suffolk resident witnessed an interesting crash landing on her property on Tuesday.

Jennifer McCusker, a Burbage Grant homeowner, was in her garage sorting boxes of toy donations when she heard a strange sound through her open garage door.

“I heard a lot of really loud rustling, almost like something was falling through the trees, like a big branch,” McCusker said.

She moved past the rear of her truck in the single-car driveway and found two bald eagles interlocked and struggling on her driveway.

“I was wondering if this was really happening,” she said.

She took a step towards the pair, then immediately stepped back when the birds kept rustling with open beaks, seemingly breathless from their struggle, she said. She used her cellphone to call her sister-in-law, Denise Knight, who was just inside the house.

“I said, ‘You need to come out here, because I think I’m going crazy,’” she said.

Within minutes, animal control had dispatched an officer, and numerous black birds and falcons were in the trees or soaring above the tangled eagles, cawing loudly, according to McCusker.

“It was just a lot of fluttering with the big wings that they have,” she said.

The bald eagles broke free after about seven minutes, then took off without a trace, she said.

“It was something you don’t see every day,” McCusker said, laughing.

It’s possible that the pair of winged predators were actually courting one another, according to a story in the July 2016 issue of National Geographic Magazine.

The maneuver is known as the “cartwheel display” or “death spiral,” according to the article, “For Amorous Bald Eagles, a ‘Death Spiral’ Is a Hot Time,” by Patricia Edmonds.

David Buehler, wildlife ecologist with the University of Texas, is quoted in the article.

“The two soar up to high altitude, lock talons, and tumble and cartwheel toward the earth,” Buehler stated. The display determines the fitness of a mate.

“It’s like going out on the dance floor if you’re a really good dancer,” Buehler stated.

A Suffolk church is getting ready for its annual attraction to draw motorists for a meaningful holiday experience. For about... read more