The Nansemond River boys’ basketball team is looking to improve on a five-win season from last year.

The team tips off its season on the road against Deep Creek High School this Friday. It will be the first test for a Nansemond River team who will be looking to make up for an unfortunate 2016-2017 season.

Last year, the Warrior won five games, which was the lowest season win total in school history. However, the record did not fully tell the story of the season. In numerous games, the Warriors lost by five points or less.

This season, the team hopes to turn those close losses from into wins. It is off to a good start, having returned 10 players from last season’s team. Josh Hale returns as the senior point guard for the team. Jeremiah Lewis returns as a forward who can score and will be among the team’s leading rebounders. V.J. Wilkins will provide a scoring threat off the bench for the Warriors. Tyler Chatman also returns as a productive option for the Warriors. The Warriors will also return Gerard Stringer and Pheldarius Payne once the football season is over. 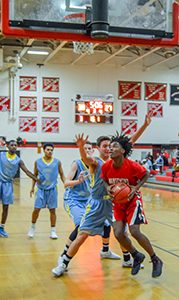 Jeremiah Lewis is one of the Warriors’ top returners for the 2017-2018 season.
Linda Lewis Photo

Long time Warriors coach Ed Young is looking forward to what his team has the potential to do. Over the summer, they played quality basketball and then carried it over into the fall as well, as the team participated in a fall league.

“The kids stuck it out last season,” Young said. “We try hard not to dwell on the negative. Our kids play hard, and we feel confident as a staff that this team could be our best team in the last four years.”

The Warriors’ schedule will take a slight shift back to the old. Instead of playing in the Conference 10 like they have been the past two years, the Warriors schedule will feature strictly Southeastern District opponents. At the end of the season, the top eight teams in Nansemond River’s region (5A) will advance to the regional playoffs.

Young wants this team to be one of those eight playing after the regular season. Young’s motto for the season is “Good, better, best.”

“You either have to be good or getting better every day, or you have to be the best,” Young said. “You have to fit one of those categories. I tell the guys this all the time.

Young will use the first few games of the season to see the best lineups the Warriors can put out on the floor.

Nansemond River will face Deep Creek on the road at 7 p.m. Friday.