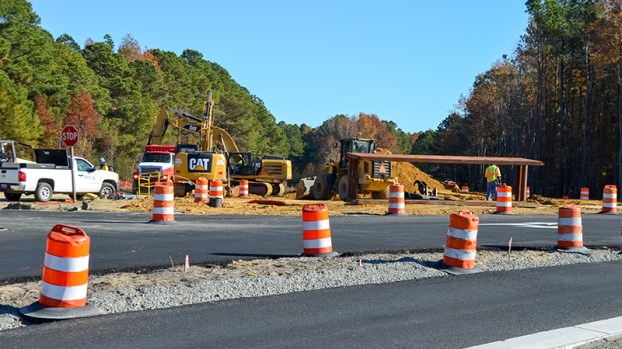 Weather permitting, construction of the roundabout at the intersection of Harbour View Boulevard and College Drive is expected to be finished early next year, according to Economic Development Director Kevin Hughes.

Progress made on North Suffolk site

A promising North Suffolk property continues to sit vacant while city leaders make moves behind the scenes toward the ultimate use of the property.

Economic Development officials are in the process of modifying a rezoning application for what’s come to be called “The Point at Harbour View,” which is expected to be presented to the Planning Commission early next year, according to Economic Development Director Kevin Hughes said.

The 55-acre property is bordered by Armstead Road, College Drive and Interstate 664. In July, EDA voted to amend the rezoning application for the contract with Gee’s Group Partners of Virginia Beach to better coordinate with the city’s comprehensive 2035 plan.

The amendment allowed for the property to transition from being classified as a commerce park — designated strictly for office development — to a mixed-use zoning application for a variety of projects, rather than general commercial zoning.

According to Hughes, studies are still under way to ensure that there are adequate public facilities for the property, such as water quality and traffic impact.

“What it really comes down to is do we have the infrastructure in place to support this rezoning, and if not, what improvements are needed,” he said.

Hughes said more information should be shared with the surrounding community in the next few months about the rezoning ahead of the Planning Commission meeting.

“We need the zoning modified in order to bring meaningful development, but we’re continuing to have good conversations and discussions for future users,” he said.

Construction crews began work on a roundabout at the intersection of Harbour View Boulevard and College Drive in August to accommodate the expected influx of users and future development at the site.

Hughes said that construction is actually ahead of the originally scheduled April deadline and should be finished early next year if conditions remain favorable.

“It’s really weather dependent, but construction has moved very smoothly and is ahead of schedule right now,” he said.

The grand jury on Monday indicted 35 defendants on 67 charges, including two people charged in vehicle crashes that resulted... read more