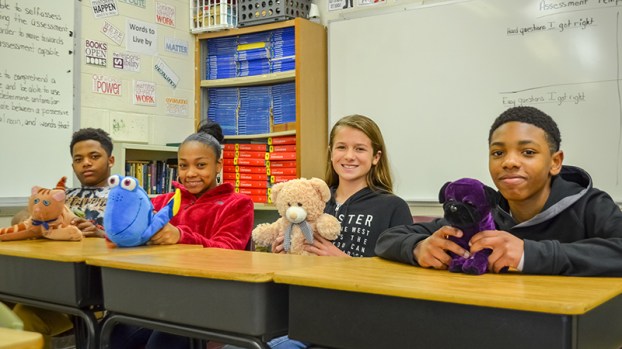 Several students at Forest Glen Middle School are working together to keep their school drug-free as they build positive relationships with authority and collect donations for children in dire situations.

The school’s Wildcat Watchers club participated in the Crime Stoppers Luncheon held at Liberty Spring Christian Church on Nov. 15, along with other Crime Stoppers groups from each of the Suffolk Public Schools, according to FGMS English teacher and club sponsor Kerri Epperson.

At the luncheon, Suffolk police explained the dangers of drugs in today’s world. Lt. Jesse Epperson, for example, spoke about the dangers of the opioid epidemic across the country and in the city.

“They’re the thing that kills people the most,” said FGMS eighth-grader Megan Goodman, 13.

Crime Stoppers is a city-wide school organization that allows students to report criminal activity in their school or community safely. Information that assists in an investigation is rewarded, and all reports are done anonymously.

Reports can be made through the Crime Line and through the phone application P3, which allows students to share information anonymously with Crime Stoppers programs, law enforcement and school officials.

“You can send in video or images of somebody doing drugs, and possibly get a reward if it leads to an arrest,” said FGMS eighth-grader Caleb Tillery, 14.

Caleb and some of his fellow Wildcat Watchers talked about the dangers of drugs that they’ve learned from informational videos and interactions with law enforcement.

“I saw one person, I forget what drug he was using, but one side of his body was paralyzed,” Caleb said.

“In the worst-case scenario, you could die,” Caleb said.

According to eighth-grader Kalin Lewis, 14, the trick to avoiding danger is to stay in good company.

“I just stay away from the wrong people, and hang around the good crowd,” Kalin said.

Kerri Epperson said she’s seen her students develop positive relationships with law enforcement in the past year, including School Resource Officer Nicole Hayward at the school, and other officers at the luncheon.

“They were laughing and talking to sergeants and everybody else,” she said.

Fostering these relationships is crucial for students that may live in areas where they’re exposed to drugs and violence, she said.

The students are helping other children be comfortable by collecting stuffed animals to donate to the Suffolk Police Department. They’ve collected more than 40 such toys since Nov. 9, Epperson said.

These will be turned over to the police officers over Christmas break, who will keep them in their vehicles to give to kids in crisis.

“If they’re sad because they were in a fire, or they were hurt by someone, they can hug it and take out all their anger or sadness,” said sixth-grader Emma Smith, 11.

Eagles crash in on homeowner