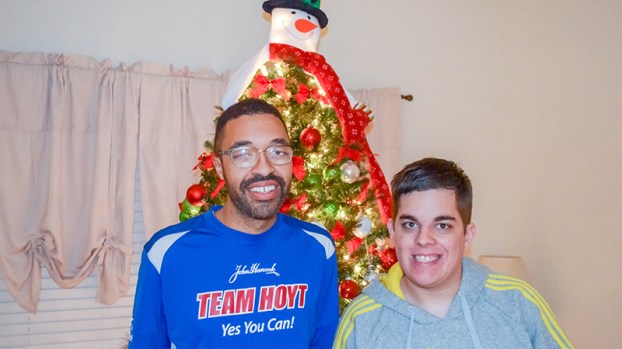 Michael Davis of Suffolk, 33, and Ashton McCormick of Chesapeake, 18, will run in the Boston Marathon in 2018. Davis, who is legally blind, will push McCormick, who has autism, in his race chair for the marathon.

An inspiring pair of racers will push themselves — and one another — for their biggest challenge yet.

Michael Davis, 33, and Ashton McCormick, 18, successfully finished the Shamrock Marathon in Virginia Beach this year in time to qualify for the 2018 Boston Marathon. Davis, who is legally blind, was pushing McCormick, who has autism, in a race chair.

Davis first ran the Boston Marathon in 2013 but stopped a half-mile from the finish line when the bombs went off, killing three and injuring hundreds. He completed the marathon in each of the following two years.

Joined by guide runner Joe Orth, he and McCormick will be the first Boston Marathon duo team of a legally blind runner pushing a rider with a disability.

“It’s really exciting, especially to be accepted as the first blind runner to do this,” Davis said.

He described the process as a “four-and-a-half-year negotiation” with Boston Athletics Association, as there were no rules for how a legally blind runner would be able to accomplish this.

“They kept saying they never heard of it,” Davis said.

Davis, a North Suffolk resident and avid marathon runner, has been racing with McCormick since 2012 when the two met through Team Hoyt, an organization of runners who race while pushing riders with special needs.

Davis said this will be their third marathon racing together, with him pushing a combined weight of more than 200 pounds between the chair and McCormick, who will have his customary blanket, headphones and snacks.

“He gets to sit in a chair, listen to music, and have pretzels,” his mother Jennifer McCormick said.

“And enjoy a soda,” Davis added.

Jennifer McCormick said it has to be that brand so Ashton can put one on each of his fingers mid-race.

“We don’t call him pretzel hands for nothing,” she said.

“I’ll do four, five, maybe six miles with Holden, and then about 12 miles with Ashton,” Davis said.

With a guide runner by his side, Davis has gotten comfortable with this intense regiment, he said.

“I’ve gotten really good at it,” Davis said. “Ninety-nine percent of races, I have no issues, really.”

Davis and his wife, Reneka, have also become close with the McCormicks over the years, spending time over the holidays at the McCormicks’ Western Branch residence, along with birthdays and even Holden’s school performances, Jennifer McCormick said.

Even so, her eldest son has still earned 20 race medals in the past year and about 120 overall.

“We used to put all the medals on the Christmas tree, but it got to the point where we had too many medals and not enough tree,” McCormick said.

She said racing has helped bring out the best in her son.

“I find that when he races regularly, he’s more social and calm,” McCormick said. “It brings out a better side of him.”

When asked why he enjoys racing, Ashton McCormick said, “Because it’s a great idea.”

His brother, Holden, has accomplished approximately 150 races himself and runs for Western Branch High School track and cross-country teams, he said.

Holden will be with him in Norfolk on Dec. 9 for the Tacky Sweater 5K, where Holden will push Ashton as his official race partner for the first time.

“I just want Ashton to have a good race,” Holden McCormick said.

Davis and McCormick are raising money for the Hoyt Foundation. Donations can be made online at crowdrise.com/o/en/campaign/teamhoytboston2018 for team “Michael Davis.”

Several students at Forest Glen Middle School are working together to keep their school drug-free as they build positive relationships... read more