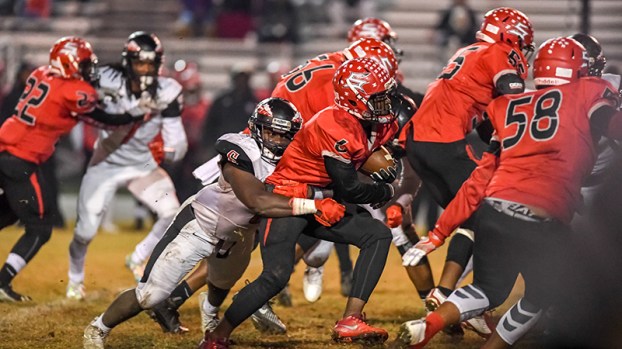 One Suffolk team remains in the Virginia High School League playoffs, and they play this week for a state championship berth.

“We’ve had a great week of practice, and we look forward to taking it to the game on Saturday,” Warriors coach David Coccoli said. “We are one of only two teams left from the Southside area of the 757, and the guys are happy to play for and represent the city of Suffolk.” 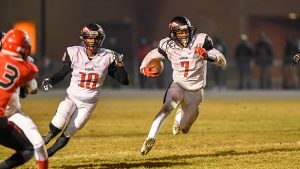 Nansemond River High School’s Gerard Stringer makes a run for it against Salem High School last week. He and the Warriors will be in action in the state semifinal game this weekend.
Sarah Murphy Photo

The Warriors have wins against both the No. 1 and No. 2 seeds in the 5A Region, with their most recent coming off No. 2 seed Salem High School last weekend.

After starting off the game 14-0, it looked as if the Warriors were going to cruise into the state semifinal until Salem started to fight its way back in the game. It led to the game being tied 21-21 after regulation. In overtime, Salem got on the board first, but a blocked extra point attempt kept the Warriors alive. On their following possession, the Warriors scored, and an extra point by Evan Lomax lead to the crowning of the Warriors as the regional champions.

Nansemond River had to quickly put that game behind them to focus on Highland Springs. The Springers are the reigning Class 5 state champions and have won it in each of the last two seasons. It will be a tall task for the Warriors to dethrone the reigning champs.

By the numbers, HSHS has been averaging 24.3 points throughout the playoffs and have given up an average of only 9.3. Last week, they defeated Hermitage High School 28-14 to take their regional championship.

Their offense can get it done on the ground or through the air. Their quarterback threw for 354 yards last week, but they also had a 100-yard rusher. However, the Warriors have averaged 28 points for the whole playoffs and have allowed an average of 18 points through three games.

“When you’re taking on an offense like theirs, you have to limit the big plays,” Coccoli said.

All of the talk recently has been the Warriors’ switch on offense late in the season. Nansemond River learned a new offense late in the season, featuring a high-powered rushing attack with a variety of different runners. Gerard Stringer, Kevin Johnson and JaQuelle Harrell are runners who have made big plays for the Warriors in the new offense showcased in the playoffs.

“The proof is in the pudding,” Coccoli said of the late offensive shift. “We felt we made a decision at the right time. The kids have bought in, and they are excited. We have two more games to go.”

The Warriors have been preparing for the game with some screen time.

“We have watched film this week, and we see that they have skilled players, so coverage is a key point,” Harrell said. “We just have to play Nansemond River football at the end of the day.”

Nansemond River will be at Highland Springs at 4 p.m. Saturday.

Lakeland High School girls’ basketball coach Daryl Rountree is looking to build up the confidence in the program. The Lady... read more