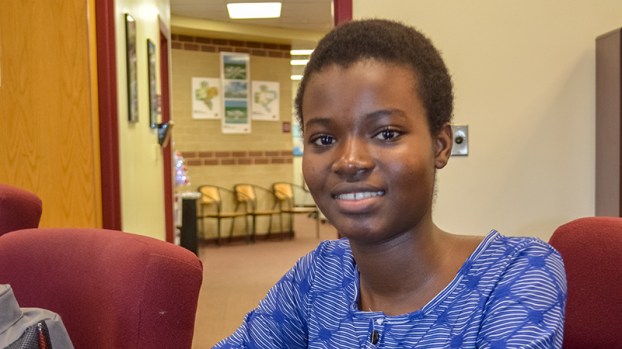 One of several exchange students in Suffolk Public Schools is challenging assumptions about her culture and improving herself through her experiences in the United States.

Tanzanian exchange student Saraphina Mkwato, 16, is attending King’s Fork High School and living with a Suffolk host family for the 2017-2018 school year. She is from the city of Morogoro, a big city in eastern Tanzania with busy streets and mountainous views, she said.

She admitted that she was struck by the relative quietness of Suffolk when she first arrived and by the abundance of forests and rivers, even behind her host family’s house.

“I wasn’t expecting this at all,” she said.

She was one of 300 Tanzanian students selected for the Kennedy-Lugar Youth Exchange and Study program that provides scholarships for high school students from countries with significant Muslim populations to spend up to one academic year in the United States.

After the first two, intense exams, only 64 students remained eligible for the final two examinations, and eventually even that number was reduced to just 16 students, she said.

“Every kid there had something special, but I guess I just got the chance,” Saraphina said.

She said she wanted to come to the United States to experience how Americans live, talk and interact with each other and learn more about herself.

“I thought it would be a nice chance for me to live my life as a different person,” she said. “I would get to educate people, but it would also expose me to different people.”

She’s tried American food like cereal — “I’ve never had milk that wasn’t boiled,” she said — and is excited to spend more time at the beach.

“My city is not near the beach,” she said. “I’ve never really been to the beach and enjoy it.”

But she’s most surprised by her time at King’s Fork High School. Unlike her boarding school in Tanzania, KFHS students wear their own clothes instead of school uniforms, she said.

“I actually have to think in the mornings about what I’m going to wear for today,” she said about her school attire, adding that she “likes jeans more” than her uniformed dress.

Teachers are more open at KFHS than her boarding school’s strict instruction, she said. She’s enjoyed studying new subjects like Spanish and trying out school clubs like Technical Student Association and Technical Drawing.

“I love drawing and sketching,” she said. “I also tried for the basketball team but didn’t make it.”

Saraphina is one of four exchange students enrolled in Suffolk Public Schools this school year, with others from Mali, Germany and Italy, according to Dr. Stenette Byrd III, director of secondary leadership and former principal at King’s Fork High School.

Byrd said that during his time as principal, he saw local students benefit from exposure to new cultures, which Saraphina experienced firsthand as an ambassador of her country.

“They ask about school life and what teenagers do at home and for fun,” she said.

She wants others to understand the diversity of her country and its unique attributes compared to other African nations.

“Everything is different in each country, and coming here gives them the chance to learn (those differences),” she said, adding that there’s more than just lions and other exotic animals. “The wildlife makes us unique, but there’s more.”

Overall, she said she’s enjoyed her study abroad so far and that being away from what she’s known her whole life has made her grow.

“I think I’m a different person now than who I was before,” she said. “I think I’ve become more responsible and more independent.”

An inspiring pair of racers will push themselves — and one another — for their biggest challenge yet. Michael Davis,... read more