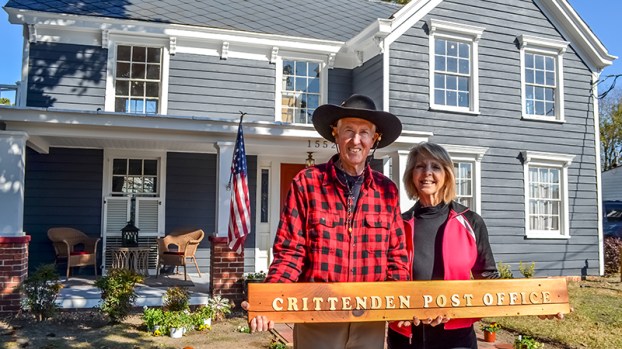 A house steeped in North Suffolk history is being restored for resale while retaining many historical insights.

Stuart Resor, an architect, and Bonnie Resor, an interior designer, purchased the house at 1552 Steeple Drive in the Eclipse community from Brian Smullen on Aug. 7, Smullen said. The building once housed the Crittenden Post Office that drew residents throughout the community.

Stuart Resor worked on hundreds of architecture projects in Borrego Springs, Calif., before he and Bonnie retired five years ago and moved to Governor’s Pointe to be closer to their grandchildren.

Smullen said the house had not had a permanent resident in about two years and was in bad shape, but he was encouraged by the work the Resors had already done on another residence just down Steeple Drive from the old post office. They also did restorations for the Kenneth W. Pretlow Cultural Center in Smithfield in 2014.

“It needed a lot of restoration, and I really do like the house very much, but I didn’t see that I would be able to get it all done,” he said, citing health concerns. “They were very enthusiastic about restoring it.”

Stuart Resor said the original 2,000-square-foot building dates back to 1882, three years after the Crittenden Post Office was established at a separate location by Captain James E. Crittenden, the first postmaster for the office.

The post office changed locations many times over the years, according to “The River Binds Us,” a historical account of the Crittenden, Eclipse and Hobson communities published by Suffolk River Heritage.

Nannie Mason, then-owner of 1552 Steeple Drive, added a 400-square-foot room where the post office relocated in 1947. Mason acted as postmistress for 17 years before the post office was moved to the strip mall on Eclipse Drive in 1965, according to the historical account.

While she was postmistress, her office became a community hotspot for lifelong residents like Virginia “Ginny” Lee, as detailed in the account.

“When Ginny Bagnell was 4 or 5 years old,” the account reads. “she would put her little dog Sugar in her doll baby carriage and they would go to Miss Nannie’s to get the mail.

“All the children liked Miss Nannie, and it was one of the first places they would go for Halloween to trick or treat, where she always gave out pomegranates.”

The Resors began restorations in earnest when their initial permits were approved on Aug. 9, Stuart Resor said.

The mail slot is still in one of the original doors, and next to that door is the buzzer that residents once pushed to call for Mason. The Resors also found one of the old stamp dispensers gathering dust in a neighbor’s garage loft, and they’re looking for more historical clues.

“We are looking for some old mail boxes to put in here, and any testimonies from carriers, drivers or postmasters that can shed new light on this old house,” Stuart Resor said.

The house itself was built in a time when framework was not neatly level, Resor said. Fresh wood and cut sheet rock is needed to keep things straight.

“The building has been sitting here a long time, so you’ve got to kind of use a little bit of ingenuity to get everything looking right,” carpenter Chris Alloway said.

Working more than nine hours daily, six days a week, the Resors expect to finish restorations within the next 30 days, according to Bonnie Resor. Viewings are expected to be held this January.

One of several exchange students in Suffolk Public Schools is challenging assumptions about her culture and improving herself through her... read more