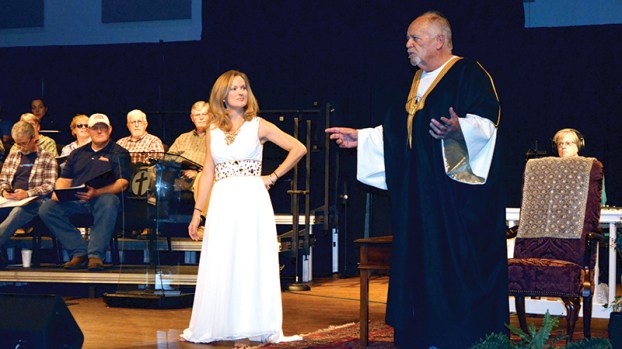 Southside Baptist Church members Allison Carr and Steve Rowe rehearse a scene as Salome and King Herod, respectively, for “Plans for a King,” which will debut this Sunday.

A local church will revel in the details surrounding the birth of Christ with an unusual and exciting Christmas story this Sunday.

Southside Baptist Church members will perform their Christmas drama “Plans for a King” at 10:30 a.m. and 6 p.m. Written by director Ernie Chenault, the play details the brutal reign of King Herod and how troubled times led to the coming of Jesus.

“I’m pretty sure no one has seen the story of the birth of Jesus told quite this way,” Chenault said.

The production is supported primarily by donations and volunteers, including 18 actors, 30 choir members and six band members, plus numerous more volunteers behind the scenes, Chenault said. Live and recorded sound effects will play through speakers that echo throughout the 400-person auditorium.

The stage will be fashioned to set the scene of King Herod of Judea’s palace in 29 B.C. after the death of Julius Caesar, with Herod’s wife Mariamne executed in the first scene for false accusations of adultery.

Rowe describes Herod as a powerful, ill-tempered man and one of the many warring faction leaders following the death of Caesar. He schemes to gain favor by rebuilding a cherished temple for his Judean subjects, but only to keep a firm grasp on his power, the actor said.

“It gives me an opportunity to show these mood swings,” he said about playing Herod. “I enjoy that aspect of it. It’s an interesting character to portray.”

Herod’s sister Salome, played by member Allison Carr, schemes alongside her brother for her own ends.

“She’s the instigator, the brains behind the throne, really,” Carr said.

While she likes to play noble characters, Carr said it was interesting to look at both sides.

Their plans fall apart when Herod hears that the true king of the Jews will soon be born. The mad king orders the execution of all young male children in the vicinity of Bethlehem to preserve his rule, also known as the Massacre of the Innocents in the Gospel of Matthew.

But all of his efforts could not stop the will of God, Carr said.

“It makes the story of (Jesus) being the hero of the world that much better,” she said.

Several cast members were especially excited about the play’s ending, which promises to be a compelling finale.

“I love the ending,” said Tonya Deaton, who plays Anna the Prophetess. “It’s kind of subtle. I hope people don’t miss it.”

Deaton’s character is also the opening narrator, explaining how God used the schemes and circumstances during a turbulent time in history to bring forth mankind’s savior.

“God had used man’s own history to fulfill his plans for a king,” she said.

American Sign Language interpreters will interpret for the hearing impaired. Call 539-6629 or visit sbcsuffolk.org for more information. The church is located at 917 Carolina Road.

Firefighters extinguished a blaze in the 800 block of Colonel Meade Drive on Sunday. The fire was reported at 11:50... read more