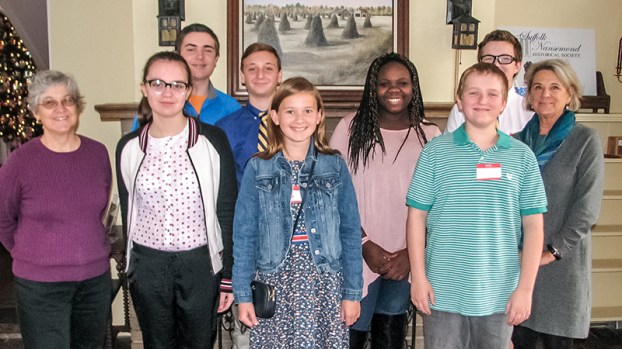 A handful of Suffolk middle-schoolers held court at the Suffolk-Nansemond Historical Society’s Phillips-Dawson House on Saturday as the authors and illustrators of a historical coloring book featuring none other than Suffolk.

“I think it turned out pretty well,” said Violet Johnston, a seventh-grader at Nansemond-Suffolk Academy. “Much better than I expected.”

The students were recruited from local schools for the weeklong summer camp during which they researched, wrote and illustrated the coloring book. Some of the illustrations were done from photographs; for other sites, the students actually took field trips during their camp and visited the sites.

The students got to sign copies of the book last Saturday and meet fans who were stopping by to purchase it.

The coloring book covers Suffolk’s beginnings to 1850. There are at least two more books planned, said Sandra Councill, who was in charge of the project for the historical society.

“I’m thrilled,” Councill said. “I think the book is wonderful. These seven students worked so well together, and they stayed on task.”

Councill said a coloring book from 1850 to the present is planned, as well as an activity book.

“I feel like if we don’t get children involved in history early, we’re going to lose them,” she said.

Violet said she would encourage doing the project again.

“It helps teach people about Suffolk history,” she said. “I think they should keep doing this project. It would be good for the other kids as well.”

“These seven kids were amazing that week,” Bunch said. “They worked so hard and diligently. They get the credit, because they stuck with it.”

Adam Tabet, a Nansemond-Suffolk Academy student who lives in Chesapeake, said he enjoyed getting to know more about Suffolk, since so many of his friends live here.

“It was a great way to get to know the history,” he said.

The coloring books cost $5 each and are available at the Suffolk-Nansemond Historical Society, 137 Bank St.; Suffolk Art League, 118 Bosley Ave.; or the Suffolk Division of Tourism, 524 N. Main St.