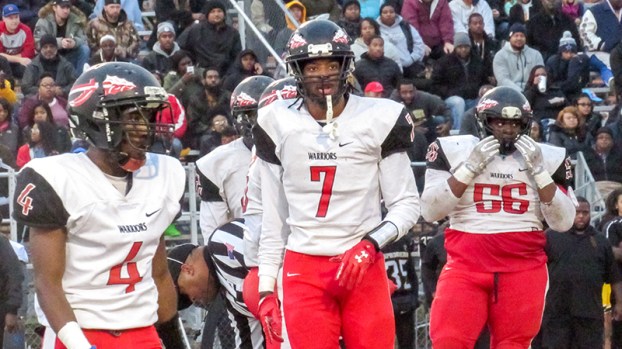 Rashaad Williams, Gerard Stringer and Joeziah Autrey walk to the sideline after a series during the state semifinal. The Warriors finished their season 9-5 and 5A Region champions.

The Nansemond River High School Warriors finished their season 9-5 and one of the final four teams in the Class 5 classification this season.

History was written this season for the Warriors. The 2017 team will be remembered as of today as one of the most accomplished teams in the school’s history. Though a chance to play for a state championship sounded refreshing, the Warriors won’t beat themselves up about it, nor will they forget what they accomplished this season.

The Warriors finished the regular season in a tough Southeastern District with a record of 6-4. That alone marked the third consecutive season where the Warriors finished with a winning record, which is the longest streak for the program and the city of Suffolk. Their record earned them the No. 4 seed in the Class 5 Region A playoffs.

From there, Nansemond River won three consecutive games, two of them on the road, to take the 5A Region championship. Prior to this season, the Warriors had not won a playoff game since 1995.

That earned them their first trip to the state tournament. They met with Highland Springs High School, the two-time defending champions.

It was a loud and intense environment for the Warriors as they went up to the Richmond area to play. Nansemond River got off to arguably one of their best starts of the season defensively. They scored 10 points off of turnovers, with Pheldarius Payne setting up an interception for three points and then Datron Branch taking a fumble for a touchdown.

After the half, Highland Springs ran off with two consecutive scores, but the Warriors put a stop to the bleeding when Quijoun Gordon went eight yards for a touchdown and a two-point conversion that cut the Springers’ lead to 21-18. But a two-yard run late in the fourth quarter by Highland Springs sealed the deal.

The tears, blank faces and sadness revealed the devastation the Warriors were suffering, but no one expected the Warriors to among the final four teams in the Class 5.

“Knowing what we accomplished allowed us to keep our head up a little bit,” senior Gerard Stringer said. “But it was hard to just let it go.”

Stringer, along with other seniors such as Wali Faulk, Evan Lomax and Quincy Gregg, won’t be able to step on the field again with a Warriors jersey. Most of the seniors will be wearing a college football uniform this time next year. They are thankful to be a part of what was built here.

“We are thankful all of the seniors set the example,” Coccoli said. “We are excited about next year’s class.”

“It has been a wild ride,” Lomax said of this season. “In the past years, we haven’t been whole. This season has been the first time everyone was on the exact same page. It was a privilege to play with these guys.”

The future is still looking bright for Nansemond River. They return 14 starters.

After a historic year for the King’s Fork High School football team, postseason awards continue to roll in. The Bulldogs... read more